You may also like
Dismiss
P&O – 175 Years of History
A Guide to Accessible River Cruises
5 Best P&O Ventura Cruise Tips
The Truth About Solo Cruise Cabins
Cunard Line vs. P&O Cruises
7 Times an Inside Cabin is the Best Choice on a Cruise
Family Cruise Hacks
Embarkation in Vancouver: Cruise Terminal Parking, Address and Amenities
Embarkation in Mobile: Cruise Terminal Parking, Address and Amenities
How to Sanitise Your Cruise Cabin in 12 Steps 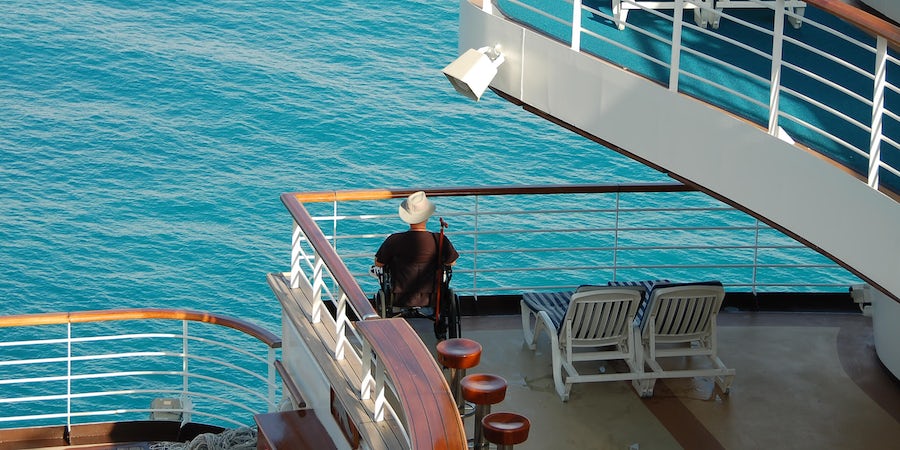 Cruise travellers with disabilities have concerns that other cruisers might never consider. Can they open their stateroom door and smoothly roll a wheelchair in? Can they easily take a shower? Is it possible to get off the ship in port or hear the evening show?

With a combination of advanced planning and the special features available on the following ships, a physical disability should not prevent you from cruising. In fact, a cruise might just be one of the best vacations you'll ever experience.

P&O Cruises operates eight ships, with a ninth, a megaship, due in 2020. The current fleet varies from the small, 790-passenger Adonia (until March 2018, when it leaves the fleet) to the flagship, Britannia, carrying 3,647 passengers. Onboard, expect a contemporary setting with a choice of restaurants and plenty of entertainment, with everything geared to the tastes of British passengers. Three ships, Arcadia, Oriana and Adonia, are adults-only while the remaining five are very popular with families. P&O Cruises' homeport is Southampton, so there are year-round departures from here, as well as a comprehensive fly-cruise programme.

Top marks to P&O for having a clearly explained section on its website for cruisers with special needs, right down to sections on door widths on each ship and ports where the gangway might be too steep for a less mobile person to go ashore.

All adapted cabins fleetwide have wide doorways into the cabin and bathroom; sufficient floor space for manoeuvring a wheelchair or mobility scooter; wet room-style bathrooms; grab rails for shower and toilet; pull-down shower seat; and flush thresholds between bathroom and cabin. None of them have a bath, though, only a shower. In cabins with balcony, there's a ramp to access the outside space. In addition, Arcadia has a number of partially accessible cabins; there's less manoeuvring room in these, so they aren't suitable for full-time wheelchair users. Collapsible wheelchairs can be taken into any cabin, provided their width when collapsed is less than 51cm.

There's a special seating area in each theatre for wheelchairs, and across the fleet wheelchair-accessible loos are featured in all the main public areas. Chair hoists are available at the pools on Ventura, Aurora, Azura and Britannia. On all ships, cabin numbers are in Braille, as are lift buttons, and the daily programme and restaurant menus can be provided in large print. For the hard-of-hearing, there's a hearing loop facility at Southampton cruise terminals and at the reception desks on each ship, as well as an 'infra-red' hearing support system in some of the show lounges.

Assistance dogs are permitted, although not emotional support dogs. If you need to hire any equipment, call the cruise line -- items like shower chairs and raised toilet seats can be provided, or larger items that meet the requirements of the International Maritime Organisation can be hired via Mobility at Sea (mobilityatsea.co.uk), which, incidentally, works with all the major cruise lines. Each ship has a few wheelchairs that can be borrowed, but they can't be reserved. Accessible shore excursions in private, adapted vehicles can be arranged via the cruise line, but you need to send in a questionnaire in good time before cruising.

The 3,100-passenger Azura has 25 adapted cabins, including one of the top suites on Riviera deck, while the 2,016-passenger Oceana has 17, again, across all grades. Ventura has 22; while the adults-only Arcadia has 18, including two massive forward-facing balcony cabins on D Deck. Oriana, an older ship, only has eight, all on F Deck, with a window but no balcony.

Adonia, the smallest ship in the fleet, has particularly high door thresholds and steep ramps. The accessible bathrooms are smaller, which means wheelchair users may require more assistance than usual to manoeuvre once inside. Passengers who are heavily reliant on the use of a wheelchair or mobility scooter may be severely restricted in embarking and disembarking at ports of call because Adonia doesn't have a low-level ramped gangway. All access to the quayside is by a narrow, stepped gangway. Accessible shore excursions are not offered on Adonia.

If you're looking for a traditional, British cruise experience, aimed at more mature passengers, with comfortable rather than ultra-modern ships, and some imaginative itineraries, Fred. Olsen's fleet of four classic, mid-sized ships could be the answer. A lot of cruises depart from British ports, so there's no need to fly, and there are some long voyages in winter to exotic destinations, again, with no need to board an aircraft. The line does warn, however, that its wheelchair accessible cabins are adapted from the original specification, rather than purpose-built, so depending on your needs, ask very specific questions when you book. All four ships have different configurations, too.

For 2018, Fred. Olsen is branching out into river cruising with one ship, Brabant, but this is unsuitable for those with mobility issues as it has no lift and no adapted cabins.

Adapted cabins across the fleet have handrails in the bathroom area, but not the cabin itself. There are rails to assist with use of the toilet and fixed seats in the showers. Raised toilet seats and extra mattresses can be requested at the time of booking. Fred. Olsen recommends Boudicca as the most wheelchair-friendly of its ships, as the adapted cabins are larger. Passengers are allowed to bring on their own equipment but it must be approved by the cruise line in advance.

On Balmoral, the pool on deck 11 has a shallow 'end', as it were, making it easier for a person with mobility issues to be lowered gently into the water. There are six wheelchair-adapted cabins on Deck 8 (two balcony suites, four with picture window) and three interior cabins on Deck 9. Wheelchair accessible toilets are on Deck 10, by the Avon restaurants, and Deck 7, by the Neptune Lounge.

Black Watch, being an older ship, has steps on the pool deck, but there are ramps for wheelchair users. The ship only has one accessible toilet in the public areas, outside the Neptune Lounge on Deck 6. There are only four wheelchair adapted cabins, all on Deck 7, all Terrace Balcony category.

Braemar has four wheelchair-adapted cabins, two inside on Deck 7 and two outside on Deck 6, and one accessible toilet midship on Deck 5.

On Boudicca, there are four wheelchair-adapted Terrace Balcony cabins on the Lido Deck (7) but no wheelchair accessible toilets in the public areas of the ship.

Accessible cabins on Black Watch have a small lip in the shower, to keep the water in, which may be challenging to a wheelchair user. On Braemar, the adapted rooms are very small for a passenger who is completely wheelchair bound. From 2018, passengers with collapsible wheelchairs or scooters will be allowed to book non-adapted cabins, while those with non-collapsible wheelchairs will only be allowed to book adapted cabins. The rules regarding scooters are complicated and vary from ship to ship but essentially, Fred. Olsen says:

On Black Watch, scooters of any type are only permitted in fully adapted cabins.

Related: Accessible Cruising: What to Expect

Saga currently operates two ships, the contemporary and very smart Saga Sapphire and the more intimate, traditional Saga Pearl II. In 2019, Saga Pearl II will retire and be replaced by a new flagship, the 55,900-ton Spirit of Discovery, carrying 999 guests in luxurious, modern style, with a second new ship on order, Spirit of Adventure. Saga holidays are specifically for the over-50s and the ships are known for their fine food and friendly, caring atmosphere. Because a lot of the passengers are elderly, the crew are used to dealing with passengers with different abilities and are kind and sympathetic. Everything is carefully thought out, right down to highlighting which excursions are best for those who are less mobile. Most cruises depart from U.K. ports, although fly-cruises are also offered.

There are two wheelchair-adapted cabins on Saga Pearl II -- 232 and 233 on A deck -- and six on Saga Sapphire -- 8061 and 8563 (Deck 8), 7080 and 7580 (Deck 7), 10536 and 10538 (Deck 10). Passengers requiring a wheelchair for excursions but not for use onboard can ask for the chair to be stored. Equipment like commodes, raised toilet seats and shower stools can be supplied if you request it at the time of booking. Accommodation details for the new Spirit of Discovery have not yet been released, but we do know that all 540 cabins have a private balcony and there will be wheelchair-accessibility across most grades. Because the ship is a new build, accessible cabins will be custom-designed, rather than adapted.

For visually impaired passengers, assistance at check in, embarkation and disembarkation can be provided. Saga will print the daily programme and onboard newspaper in extra-large type and provide Braille playing cards. For hard-of-hearing passengers, visual alarms can be requested in cabins, while most entertainment areas have hearing loop systems installed. Assistance dogs are allowed on board cruises where all ports of call fit into the EU's Pet Passport scheme.

Wheelchairs and mobility scooters must be stored in cabins, not corridors. The deck plans on the Saga website are not especially helpful if you're planning a cruise; it’s easier to call the cruise line.

CMV operates a fleet of older ships from its home base, London's Tilbury, as well as other U.K. ports. These classic vessels have a loyal following and the cruise line is known for its competitive pricing. Expect a more traditional cruise experience, with dressing up in the evenings, food and entertainment geared to a British audience and all the quirks that come with older ships; the adapted cabins won't be as fancy as those on a new vessel, for example, and there won't be such a choice of cabin grades if you require wheelchair accessibility.

Columbus, the flagship has six wheelchair-adapted cabins. Magellan only has one and Marco Polo, two.

The line's older ships, Astoria and Astoria, don't have any adapted cabins. CMV recommends Mobility at Sea as a supplier of equipment for disabled passengers, but includes a fairly strongly-worded warning on its website that older ships can be challenging for wheelchair users and passengers with other disabilities. If you want to cruise with CMV and have special needs, it is essential that you talk to the cruise line before booking as every passenger's requirements are assessed individually.