You may also like
Dismiss
Finding a UK Cruise Deal
How to Book a Luxury Cruise for Less
5 Things You Didn't Know About Booking a Costco Cruise
Is There a Best Day to Book a Cruise?
Why You Need Luxury Cruise Travel Agents -- and How to Find a Good One
5 Reasons to Go on a Quinceanera Cruise
Best Cruise Travel Agents
How to Save Money on a Carnival Cruise
9 Best Cruise Lines for Cruise & Stay Packages
How to Book a Suite for Less 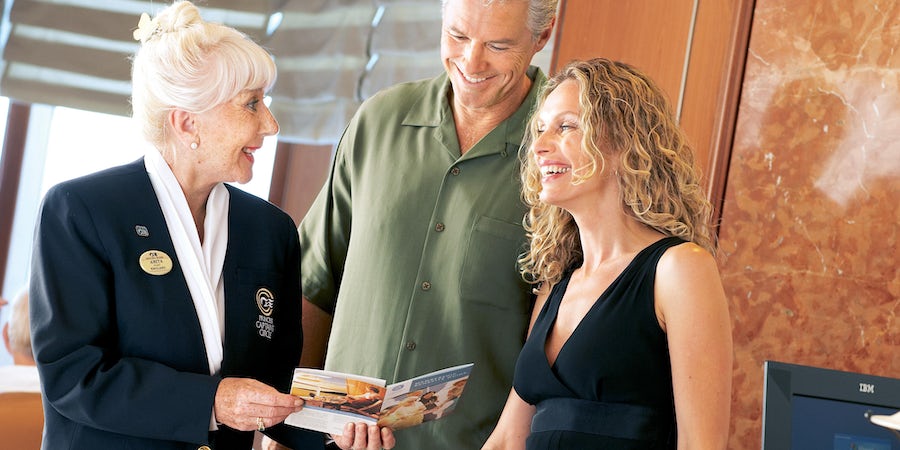 You've probably seen this kind of deal before: rumours of an extremely low fare, hundreds of pounds less than other published rates for the same cruise. Is there any truth to it?

Travel agents say yes. These exclusive rates can be acquired by a cruise line's best agent partners -- but how do you get in on the deal? First off, look for those emails about an amazing bargain with a price too low to publish; they're often sent by a cruise agency with whom you've done business or have signed up for newsletters.

We talked to some travel agents to get the inside scoop on how these "secret" sales work and how you can buy into the action. Here are the two types of "secret fares" we found, and how you can take advantage of them.

Sometimes cruise lines have cabins left on a forthcoming sailing that they can't sell -- maybe it's an unpopular date or the airfare to the departure port has become really expensive. To sell the cabins, the lines need to discount -- but doing this in a public way could upset cruisers already booked on the sailing at higher rates or undermine their efforts to establish the value of a cruise at a certain rate.

So what do they do? Travel agents receive offers from marketing partners which are not offered direct to the public. So although many people think the cruise lines offer the best deals, that's not the case.

"Cruise lines are always willing to work closely with specialist cruise agents and this is where you are more likely to find pockets of exclusivity," explains Phil Nuttall, managing director of the Travel Village Group. "These agents are trusted partners who invest in their sales team and have good knowledge of the products they are selling. So potentially you get a double whammy. Great service and a great deal. Look out for independent reviews scores such as Feefo as these are genuine consumer ratings and an indication that the agent has happy customers. "

Regarding the cruise lines, James Hill from GoCruise points out that agents have customers’ best interests in mind.

He says: "A cruise agent is an agent for the client, not the cruise line. Cruise agents not only have access to the best rates, they can help clients understand what each 'special offer' really means. The cheapest fare may not be the cheapest fare overall if there are multiple costs for excursions, drinks and speciality restaurants."

OK, so they do exist -- but how do you get them, especially if they are in the "not publicly advertised" category? Again, these aren't the kinds of deals you can dig up via a Google search; as a matter of fact, calling an agency to find out exactly what it's like to book one might be dependent on finding the right "call for rates" ad.

To be in the know when they are available, you'll want to sign up for the email lists of cruise-focused agencies. Look for agencies that advertise themselves as "preferred" sellers of various cruise lines -- that means, the agencies sell a high volume of those line's cruises and have good relationships with the lines, so the lines are more likely to offer them these deals, knowing they can sell them. And when you see a message to "call for low rates," definitely call. True, sometimes it's just a gimmick, but you might stumble upon a deal that's so good, it can't be advertised.

If you cruise a lot, establish a relationship with a travel agent. If you're loyal to them and they know your holiday preferences, they'll be more likely to come to you when they see a great deal that's up your cruising street.

These one-off or "unpublishable" fares are often for last-minute cruises and available for a limited amount of time. You'll need to book quickly, especially as only a few cabins are typically available at the lowest rates, and then deal with making travel arrangements on the fly.

Buyer beware: The cabins that are left over might be next to crew quarters or noisy parts of the ship. It might be cheap, but it might be a less-than-desirable cabin location. So double check the exact location before booking. Again, specialist agents will always be transparent as they want to build up good relationships with customers.

If you're looking for added value or bonuses rather than bargain-basement pricing, consider booking a coveted sailing in advance through an agency; there are still unadvertised rewards to reap.

"I always recommend clients book their luxury cruise early to secure the best fares and the best suites in the most desirable locations onboard," says Scott Anderson, general manager, The Luxury Cruise Company. "Many lines will entice early bookers with added value benefits such as free flights, free flight upgrades, suite upgrades, onboard credit packages and more. As the ships fill up these benefits are withdrawn and the suite fares will increase, too.

"The most popular suites are the ones that sell first, so the midship suites will be booked quickly as well as the popular higher level suites. Many ships will only have a limited number of 'top suites', such as owner's suites and the savvy traveller needs to book early to secure these. Also, if you have your heart set on a specific itinerary on a certain date then book early as you do not want to miss out. Expedition voyages also sell early, by their very nature the ships are smaller and many only carry 200 guests or fewer, and often sell out nine months to a year in advance, especially on 'one off' voyages."

Earlybird bookers also benefit from a wider range of perks, including exclusive bonuses not offered by the cruise lines.

"To get even more value from your luxury cruise, again you need to book early as this is when the cruise lines have the most added value inclusions such as Wi-Fi packages, land packages and flight offers," adds Anderson.

"Another thing to bear in mind is that some luxury cruise specialist travel agents have access to special rates and added onboard benefits that even the cruise lines don't get, so it's not always better going direct. Additionally, those cruise specialists can often 're-package' the cruise using special fares and have a wider choice of flights, hotels and transfer services so can offer a better holiday package with more inclusions for the same, or sometimes cheaper, than going direct to a cruise line."

Travel agencies buy group space on cruises far in advance, when fares for those sailings first become available. Because they're buying in bulk -- often paying a deposit on each cabin blocked out -- and because these agencies have worked hard to build relationships with the cruise lines, the cruise lines offer them low rates on these cabins.

"The advantage of having access to group rates is one of many things," says Clare Dudley, managing director, Ponders Travel.

"Firstly buying when the fares are released normally will give you access to the best fare. Once the group commitment is taken, then the fare is saved. This can lead to some substantial savings further into the booking months as the fares may have risen with the cruise line but the ones inside your group will be cheaper. Most cruise lines will also offer something like a complimentary berth once 20 full paying passengers have been achieved. This can help with tour leader places for the group and is a nice incentive.

Unlike the one-off, eleventh-hour sales described above, the best group rates can be found more than 90 days prior to sailing. This means these deals are best for people who can book early. Look for deals on popular sailings (peak travel periods, holidays, popular destinations) -- reason being, if agencies are going to put money down in advance, they want to guarantee that they can sell the cabins later. And the deals won't be labelled as group rates (it's not like when you and your 10 best friends book a group cruise) -- so ask your agent or simply look for the low fares.

You will need to commit in advance -- but if you work with a trusted travel agent, they should be able to give you a sense of whether you're getting a good deal or if that price is likely to come down closer to departure. "The earlier you can plan your group the better," adds Dudley. "Group space is more readily available for early bookers and of course all the early booking discounts are applicable, too.

"Whilst you have to lay down a deposit quite a way in advance, you then have a long period in which if you change your mind you can cancel at just loss of deposit. By dealing with a travel agent that is used to groups you can be sure to have a much more hassle free experience for your group, and be sure to have the best rates, the best marketing support and most importantly the best experience on board as we all have access to many top tips to make sure your group runs to plan."