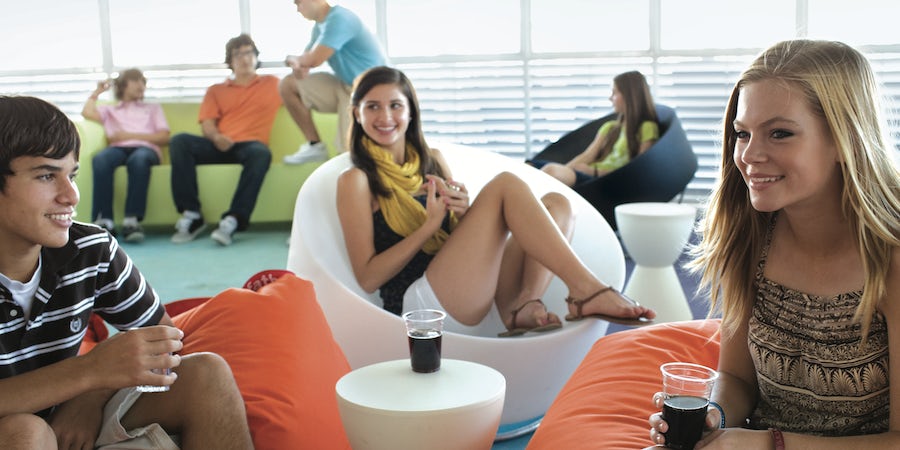 It's no secret that a dissatisfied teen on vacation can create a messy imbalance among an otherwise happy family. Parents are wise to seriously consider their teen's personality and input when choosing a cruise ship for their next family cruise. Today's cruise ships cater to teens more than ever before with increasingly larger teen clubs (some of which have discos, lounges and outdoor sun decks), spa treatments for adolescents and casual and flexible dining options. The smartest cruise lines also separate out tweens (generally ages 12 to 14) from older teens.

Speaking from experience, here are our editors' picks of the best cruises for teens.

Teenagers, those hard-to-please opinion leaders, are in hot demand by the cruise industry. Both surveys and anecdotal evidence suggest that parents in search of a pleasant holiday would do well to not only consult but also seriously consider the input of teen members of the family. This age group -- bearing that heady mixture of youth and adulthood -- is one of the travel industry's most demanding. And it's no secret that a dissatisfied teen can create a messy imbalance even among an otherwise happy family.

Cruise lines are interested in drawing teens, too, knowing that they have special impact on family vacation choices. And there's another reason: Today's teens are tomorrow's twenty-something adult passengers. As such, most cruise lines offer special programmes, facilities and amenities for the teenage cruise traveller. Highlights of these include increasingly larger teen clubs, some of which have discos, lounges and outdoor sun decks. Many ships offer tween clubs, which separate younger teens (generally ages 13 and 14) from older ones. More plentiful, casual and flexible dining options appeal to teens, and larger family cabins can accommodate five or six passengers. Additionally, some lines offer shore excursions geared (and limited) to teens, and youth spa programs on several lines now offer treatments like mother/daughter facials, father/son massages, spray tans and pedicures.

From outward appearances -- iPods, smart phones and general ennui -- teens appear to be a homogeneous group. But, like the cruise lines themselves, teens come with distinct personalities, from party animals and sports jocks to nature-lovers and computer junkies. Some teens enjoy organized activities, while others prefer roaming independently on a ship the size of a small town. And some are drawn to adventure and enrichment without the big-ship distractions. As such, matching your teen's personality with that of the cruise ship is crucial.

Consider these other points, too: cruise length can be an important factor for busy teens, with short itineraries often working best. Families with both teens and younger siblings will want to select a ship with a solid children's programme so the entire clan will be happy.

Speaking from experience, here are our editor's picks of best cruise options for families with teenagers. Why: These ships are literally floating playgrounds with features that include ice-skating rinks, rock-climbing walls, miniature golf courses, full-sized basketball courts and large teen facilities. If the kids are looking for fuel, they have more than two dozen dining options from which to choose. We heartily recommend a pit stop at either the Wipe Out Cafe or Johnny Rockets.

Best features: Like many other lines, Royal Caribbean divides teens into two groups in its youth programme. Navigators (tweens, 12- to 14-year-olds) are wisely separated from the Teens (15- to 17-year-olds) for activities like karaoke, open mic nights, toga parties and sports tournaments. Teens will love the FlowRider surf simulator, teen casino and the Scratch DJ Academy, where they can learn how to mix records. Spas on both ships offer an array of treatments just for teens.

Beware of: While bigger is often better when it comes to ships for teens, it can be easy to lose track of your kids on such big ships, and unsupervised teens are one of the cruise industry's biggest hassles. If you can't count on cell phone service, consider bringing walkie-talkies for teens who spend a lot of time roaming alone; on these ships, you could literally go days without running into one another. Why: MSC Cruises has always been a great line for teens, with its party atmosphere and a relaxed approach to late night parties attended by all ages. But with the launch of Meraviglia, followed by Seaside, the line has moved up a gear when it comes to facilities. Super-cool water parks, poolside theatres, plenty of fun and casual eats, and their own very cool hang out room adjacent to the kids' club make them feel right at home on this trio of ships.

Best features: For older teens, 15 to 17 years old, the Teen Club is the place to be. During the day they can hang out on oversized beanbags, and play numerous video games including PS4, Nintendo Switch and VR. Their programming is pretty light touch, again afternoons only (except on sea days) and will include generation games, dancing and sports competitions including mini-golf and ping pong. The Teen Club is in a great spot -- right by the arcade area, and they will love the 4D Cinema on all three ships, a 4-D movie experience where you get to shoot zombies with special effects like vibrating seats and air jets. The sports complex below has basketball and 5-a-side football during the day.

Beware of: You may never see your kids -- which can be a plus or a minus! The ships are huge and there is so much to do. Also be mindful of allowing your kids unchecked access to the arcade area -- it's not free and the cost of all those games will add up fast. Why: The casual atmosphere on Norwegian's ships attracts many families with teens. Its newest ships offer the ultimate in teen-friendly dining choices, ranging from Teppanyaki and sushi to French. There is also 24/7 pizza. Not only does that mean terrific flexibility (particularly at dinnertime), it also means teens can eat with -- or without -- their families. The ships are also strong on entertainment for young folks (including a Rock of Ages production on Breakaway). A three-story sports complex features ropes courses, rock climbing, basketball and mini-golf.

Related: Yes, There Are Fun Things to Do on Cruises for 18-Year-Olds, 19-Year-Olds and 20-Year-Olds

Best features: An impressive amount of real estate is dedicated to teens on Breakaway and Epic. Teens can hang out in Entourage, which by day has self-serve food, soft drink stations, PlayStation, air hockey, pinball, foosball, and a host of other games, and by night transforms into a teen disco with dancing and music until the wee hours. The Aqua Parks on these ships are also impressive: Epic's Epic Plunge is a bowl slide that drops through a 200-foot-long tube, and Breakaway has a pair of twin free-fall slides.

Beware of: Norwegian allows teens 18 and older to drink beer and wine onboard with the permission of parents. Even if your teens are not drinking, be aware that their peers might be. Why: Princess' newest ship, which debuted in June 2013, offers something for every conceivable age group. Sure to please teens is the ship's pool deck, where they'll have access to two freshwater pools, Movies Under the Stars (on a jumbo screen by the pool) and a water and light show every evening. Other cool features and activities that will appeal to teens include a batting cage and a laser shooting range, teens-only "mocktail" parties and formal dinners, and an aerobics studio that offers Pilates, yoga, spinning and TRX.

Related: Norwegian Escape vs. Anthem of the Seas

Best features: Royal Princess addresses what has always been a downside to most onboard teens (and kids) clubs: they're inside. This ship's teens club (ages 13 to 17), called Remix, has an outdoor lounge with a teens-only wading pool, outdoor seating and space for open-sky parties. The indoor space for teens is equally impressive, with a D.J. booth and lounge area with table football, hip-hop dance classes, Skee-ball and video games. Teens will love the ship's all-ages sports area, which has a golf driving facility, basketball, volleyball, tennis and an upper deck with an artificial grass area for bocce, croquet and lawn bowling.

Beware of: Princess, in general, caters to a more traditional crowd, and longer cruises attract older travellers. If you're taking teens, look for shorter itineraries or cruises during school holidays when more kids are onboard. Why: Disney sets the standard for youth programming and amenities, including cabins designed with families in mind and production shows geared toward the young and young at heart. While younger siblings will be thrilled to meet Disney characters onboard and to see Disney classic movies on the big screen, teens (and tweens) will enjoy having their own hangout spaces. Clubs for the older crowd are fun, retro-hip spaces that are not a mere afterthought, and they really cater to the older set by playing down the character connection.

Best features: Vibe is the cool lounge for 14- to 17-year-old teens on Disney's newest ships; the no-parents-allowed teen centre is a coffee shop-style hangout, with overstuffed couches and chairs, big-screen TV's and a bar that serves soft drinks and smoothies. Teens can entertain themselves with a D.J. dance area, Internet access, board games and events (such as karaoke, dance classes and trivia games) led by hip crewmembers. Kids can even get some fresh air on the attached sun deck without leaving the club. Outside their private haunt, teens will enjoy watching movies (like "Pirates of the Caribbean") on the pool deck and taking part in Disney's over-the-top evening deck parties.

The Edge is a tween club located in the forward funnel that offers many of the same activities as Vibe, but for the 11- to 13-year-old age group. There are computers with access to intranet social networking, an 18-foot-long video wall and a porthole to view people passing by on the AquaDuck waterslide.

Beware of: Some teens might be too cool for the constant Disney hype and get frustrated with all the mouseketeering, while others may get into the Disney spirit. Know your teen's personality before you book a cruise.

Related: 12 Surefire Ways to Have a Miserable Cruise Why: P&O Cruises family-friendly ships have a host of fun things teens to do including outdoor sports courts where you can play basketball, football and cricket; a number of swimming pools, including some more active ones where you can play pool volleyball; dance classes and -- on Britannia -- family cookery classes in the Cookery Club.

Best features: All the family ships have well thought-out spaces for teens with a host of bang up-to-date gadgets too keep the most demanding teen content: X-boxes, PlayStation, and giant TVs. The programming is light touch, but there's plenty on offer if your teen fancies it, from football, talent shows and late night parties to organised games and karaoke. Also on Britannia, a P&O Cruises first: a teens-only deck complete with plunge pool, deck chairs and access to the H2O room.

Beware of: P&O Cruises doesn't separate the teens into younger and older age groups, so you may find your just-turned-13 child hanging out with 17- and nearly 18-year-olds. Also, be mindful that out of main holiday times even the family ships revert to a more traditional P&O Cruises' clientele who might not be understanding of your teen's exuberance.