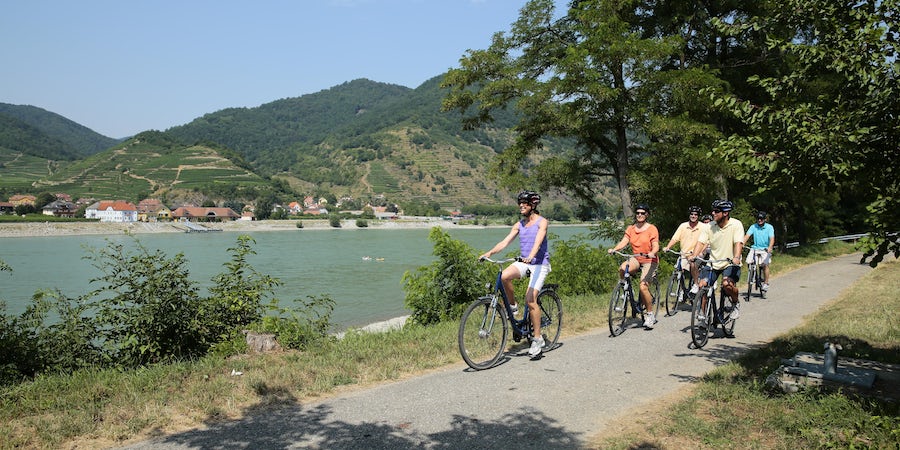 You can get a workout on pretty much any cruise, but to maximise your adrenaline-pumping options, it's best to find the right combination of cruise ship and destination. Active cruise travellers will usually turn up at least a handful of shore experiences to whet their appetites for adventure, but if you're cruising with a sedentary lot, that city bike tour or rainforest hike might get canceled due to lack of interest. Likewise, certain ports simply don't lend themselves to athletic adventures, while others have so many active choices, it's hard to make up your mind.

Below, we have listed our picks for the 10 best adventure cruise destinations for those who are active travellers, as well as our suggestions for the cruise lines that make the best matches. Just don't forget to pack your running shoes and snorkel gear.

Why: Hardy cruisers who love a bracing countryside hike need look no further than their own doorstep. The British Isles are rich in dramatic landscapes dotted with impressive castles and gorgeous gardens. They're also teeming with wildlife, where there's even a chance to spot whales and eagles.

Who: Hebridean Island Cruises is outstanding when it comes to luxury small-ship cruising around Scotland, Northern Ireland and the Isle of Man. Hebridean Princess carries just 50 guests in elegant country-house style, using two smaller boats to reach many hidden gems. Its Footloose walking itineraries are good for active types (you can choose your intensity), including Footloose through the Long Isle. Alternatively, if you're a keen cycler, take advantage of the line's Cycling Over the Minch voyages.

Why: The Baltic countries of Sweden, Denmark, Estonia, Latvia, Finland, Germany, Lithuania, Poland and Russia are fantastic for culture vultures, who will love exploring the winding streets of their medieval cities. St Petersburg, with its onion-domed Church of the Saviour on Spilled Blood and pastel-coloured palaces, is a highlight, as is the charming split-level Estonian capital of Tallinn. Its hilltop castle provides plenty of stairs for those willing to work for fantastic views over the Old Town.

Who: The Baltic Cities and St Petersburg itinerary is a regular feature in the Cruise & Maritime Voyages calendar. Baltic Cities & St Petersburg cruises depart from May to October, with the added bonus of local departure points of London, Dundee, Newcastle, Harwich, Bristol, Portsmouth and Hull. Excursions include Walk & Cruise through Copenhagen, Old Town Walking or Segways in Tallinn, and a tour of the Peterhof Palace and 300-acre gardens in St Petersburg.

Why: An Arctic cruise guarantees staggering scenery, as you travel past glaciers, white-topped mountains and wild landscapes that are home to whales, walruses, Arctic foxes and polar bears. The Norwegian Fjords are popular with first-time Arctic cruisers, while longer sailings may go on to Greenland and Canada. Expeditions to the North Pole and the Russian Arctic are also available for the adventurous traveller. It's worth noting that October to March is the best time to see the Northern Lights.

Who: Hurtigruten is leading the way into the Arctic on its ice-hardened explorer ships. Cruises vary from five to 19 days, and an example itinerary would be its Norwegian Fjords and Spitsbergen trip. It sails through several scenic fjords and around Europe's most northern point, the North Cape. It then continues on to Spitsbergen, an island between Norway and the North Pole. These cruises are already full of adventure, but you can also add excursions including mountain hiking, husky sledge-riding, snowmobile safaris and Arctic bushcraft.

Why: The volcanic Canary Islands has lots of dramatic scenery to discover, including the lunar landscape of Lanzarote's Timanfaya National Park, Mount Teide on Tenerife and Sahara-esque sand dunes in Gran Canaria. There are also waterparks, tropical gardens and animal attractions to explore, while their proximity to Africa makes for a dry and sunny climate all year round.

Who: P&O Cruises offers trips from Southampton to the Canaries -- perfect if you want to avoid the airport. Excursions to look out for include camel rides across Timanfaya National Park, an electric bike tour of Las Palmas de Gran Canaria and a cable car ride to the top of Mount Teide.

Why: Western Mediterranean cruises are a short sail from the UK and typically include France, Spain, Morocco and sometimes Portugal and Italy. These ports offer plenty of new experiences, whether you're interested in walking the Monaco Grand Prix street circuit, white water rafting southern France's exhilarating River Var or touring Gaudi architecture in Barcelona. Round trips are available from UK ports -- or choose one of the many itineraries that leave from Barcelona, Venice or Rome (Civitavecchia).

Who: Cunard has several no-fly Western Med itineraries available on its luxurious ships Queen Victoria and Queen Elizabeth, which are ideal if you want a traditional cruising experience. While travellers tend to be more senior, the large ships have excellent facilities and a packed activity programmes, offering everything from fencing to ballroom dancing onboard. The 14-night Mediterranean Highlights itinerary travels from Southampton to Cadiz, Barcelona, Cannes, Rome, Naples, Sardinia and Gibraltar.

If you'd prefer to cruise among a younger crowd, check out Celebrity Cruises, Royal Caribbean International or Marella Cruises.

Why: Typically covering a combination of Turkey, Greece, Cyprus and sometimes Italy, Croatia and Bulgaria, Eastern Mediterranean cruises may even venture as far east as Israel and The Holy Land. The result is the most interesting history lesson of your life, as you visit sites such as the Acropolis in Athens, the ancient city of Ephesus in Turkey and the medieval Old Town of Rhodes. And that's before you get to the incredible natural attractions, from towering mountains to deep gorges, with rushing rivers, lush vineyards and diverse coastlines.

Who: Windstar Cruises offers yacht cruising -- perfect for getting to hard-to-reach places. Water babies will love the ships' watersports platforms, from which they can swim or kayak to shore. Plus, many sports marinas offer jumping off points for snorkelling, windsailing, paddle-boating and water-skiing. This luxurious but laidback line has several Eastern Med itineraries and its excursions are helpfully categorised by effort level.

Why: A river cruise will take you through the heart of Central Europe, offering voyages along the Danube, Rhine, Main and Moselle rivers. Each river will take you through picturesque valleys, vineyards and villages. Besides the gorgeous countryside of Austria's Wachau Valley, the Black Forest and Rhineland, you'll also visit several major cities on the way -- Vienna, Budapest and Bratislava all sit on the banks of the Danube, providing plenty of walking opportunities along the way.

Who: AmaWaterways offers many itineraries, travelling on modern, stylish ships complete with swimming pools, fitness rooms and fleets of bicycles and electric bikes. Small-group shore excursions are included in the cost of the cruise, and you can set your own pace on the walking tours as they're divided into Gentle Walkers, Active Walkers and Late Starters (for those who want a lie-in). Stay and cruise options from Prague to Budapest are a good way to get the best of city and countryside experiences, and could include a hike of the Dürnstein Fortress in Austria, a bike tour of Old Town Vienna, an exploration of Castle Hill in Budapest and even a private Oktoberfest when you board in Vilshofen.

Why: Caribbean cruises often kick off from Florida, which in itself offers everything from dancing in Miami's Latin clubs to riding rollercoasters in Orlando. Once you set sail, you've got the Bahamas, Turks & Caicos, St Thomas, St Kitts, Antigua and the British Virgin Isles in the east. After that you can continue south to St Lucia, Barbados and Trinidad & Tobago. The white-sand beaches and watersports are a huge draw, with unrivalled snorkelling and scuba diving. Plus, you've got waterfalls, caves, forests, sugarcane fields and volcanoes to explore in land.

Who: Royal Caribbean International is hard to beat, and you'll find as much happening on-ship as onshore. Oasis of the Seas, for example, features a Vitality at Sea fitness centre, a full-size sports court, several pools, a FlowRider surf simulator, rock climbing wall, zipline and even an ice rink! This line has a massive choice of Caribbean itineraries, varying from three to 12 nights, with stay and cruise options available.

Why: Western Caribbean cruises tend to focus on Mexico's Caribbean coast, including the island of Cozumel, and Jamaica. Mexico is a dream for active types with an interest in archaeology and Mayan culture, as well as for snorkelling and scuba diving fans. Jamaica also has a reputation as a livewire destination, offering everything from horseback riding and river rafting, to climbing the Dunn's River Falls and cycling up the Blue Mountains. The Cayman Islands (where you'll find some of the Caribbean's best coral reefs), Cuba, Haiti and the Dominican Republic also have plenty to offer.

Who: We like Marella Cruises' itineraries on Marella Discovery 2, which include Cuban Fusion, Pride of Panama and Exotic Explorer. These all have the option of a cruise and stay extension in Jamaica, so you can take excursions into the rainforest or up Mystic Mountain, where you can bobsled your way back down. If wildlife's your thing, a Black River safari will give you the chance to see endangered American crocs. There's also plenty of nightlife on the island for those who like to stay up late.

Why: The outdoorsy lifestyle rules in Australia and New Zealand, so you'll have ample opportunity to enjoy the weather. Relaxed New Zealand is blanketed with forests, mountains, lakes, valleys, fjords and beaches, making it one of the best hiking destinations in the world. Australia, on the other hand, has gorgeous beaches, invigorating watersports, the Great Barrier Reef, iconic cities and the Sydney Harbour National Park.

Who: Fred. Olsen has teamed up with walking holiday specialists Ramblers to offer walk and cruise (or walk and fly/cruise) holidays, including a 23-night adventure in New Zealand and Australia. Cruising on Black Watch, an 804-passenger Fred. Olsen ship (with fitness centre, pools, spa, Jacuzzis, golf nets and tennis court) you'll enjoy walking tours of Auckland, Wellington, Sydney and Brisbane. There's also opportunity to experience the Maori culture of Rotorua, dive world-famous reefs, fish in Cairns, and hike and swim in the Queensland rainforest.