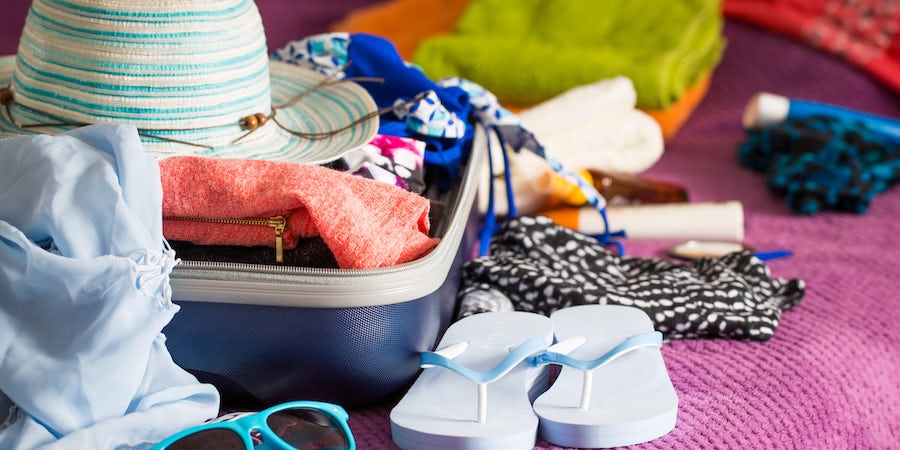 The Ultimate Guide to Packing for a Cruise (Photo: REDPIXEL.PL/Shutterstock.com)

What Not to Pack: Things You Want to Bring on a Cruise But Shouldn't Cruise lines do all they can to make sure each ship feels like your home away from home when you set sail. In spite of that, many a cruiser has yearned for extra creature comforts -- a kite to fly over the side of the ship, an iron to keep clothes looking smart or simply a bottle of a favourite brand of alcohol. But, whether they're banned by cruise line officials for safety reasons or banned by expert cruisers for practical ones, think twice about bringing the following items onboard. Read on for our list of what not to bring on a cruise.

The clothes iron -- that keystone to a frump-free formal night -- is, as far as we can tell, banned industry-wide. After all, fire poses one of the greatest risks to safety at sea. While lines like Thomson Cruises (some ships), Fred. Olsen (fleetwide) and P&O Cruises (fleetwide) have self-service launderettes with ironing boards, not all lines do. Royal Caribbean and Norwegian, for instance, lack such facilities. Your options are limited to paying the ships' exorbitant pressing fees, hanging suit jackets in a bathroom for an hour with the shower on "scald" (not recommended) or wearing something that looks like a bulldog's face.

And while those inclined to pack travel kettles are certainly in the minority, believe us, they exist. Tea snobs might argue that the surcharge-free swill masquerading as your favourite brew is a crime against cruisers. You can grab a halfway decent cuppa, but you typically have to pay extra for it at the now-industry-standard speciality cafe. It's also worth bearing in mind that while U.K. cruise lines, such as P&O Cruises and Fred. Olsen, will often stock your favourite brand and make an excellent brew, U.S. lines will almost always serve tea that tastes a little sub-standard to British palates (Liptons is not an acceptable alternative to PG Tips or Tetley). In addition, while travel kettles are almost universally banned on cruise ships, be aware that other electric items -- particularly heat-producing ones like hot plates and coffee machines -- are also not allowed onboard.

Instead, Pack: Wrinkle-Releasing Spray (it exists!) and Your Favourite Builders' Brew

A garment bag certainly works for some, but we recommend taking a tip from US cruise fans and packing a bottle of Downy Wrinkle Releaser. Available on Amazon.com, a little squirt of this wonder spray relaxes the fabric, so you can smooth out wrinkles by hand. It's available in both large sizes (checked bag) and a handy 90ml travel size.

If the idea of surviving an entire cruise gasping for a mug of PG Tips or Tetley has you breaking out in a cold sweat, take heart -- cruise ships allow you to bring tea bags onboard. And whether you've a yearning for a delicate cup of Earl Grey or a mug of Yorkshire Tea so strong you feel ready to hit the mines, most brands make small boxes perfect for suitcases. Head to the self-service buffet for boiled water rather than order from room service, as when it arrives it will almost certainly be lukewarm. Nail scissors, files and tweezers don't count. Anything you wouldn't use for personal grooming does. Swiss army knives are the exception and aren't technically banned on cruises; most lines allow passengers to bring them onboard, as long as the blades are less than 4 inches long. But in this age of heightened security awareness, we've heard plenty of stories from passengers saying airport or ship security gave them a dirty look and confiscated the item, however freakishly essential they argued it was. Remember, the bartender will be there to open your beer, and barring any Bear Grylls-style shore excursions, you probably won't have need of a mini saw. Still, for every person who's had a problem, there seem to be dozens who've taken their trusty utility tools on cruises without issue -- especially if they packed them in their checked luggage. Nevertheless, almost all cruise companies include them in their list of prohibited items and will confiscate them if brought onboard. (We need hardly add that knives, guns and scary-looking martial arts equipment is also banned).

Instead, Pack: Your Toiletry Kit … and Duct Tape

We love the utility of a multi-tool, but the most useful components for a cruise -- a nail file, tweezers and small scissors -- are already in your toiletry kit, a more cruise-friendly package. Need a corkscrew? Your cabin steward should have one. And the only screwdriver you need on a cruise is the kind made with vodka and orange juice.

Meanwhile, duct tape can serve many useful purposes in a pinch, such as fixing broken luggage and torn hems.

As a captive audience, passengers are beholden to a cruise line's bar prices, which range from modest to sweat-inducing. And don't think you can get around overpriced drinks with a BYO mentality. With their maritime versions of Prohibition, many big-ship, mainstream lines will confiscate spirits and beer brought onboard during embarkation. We won't wade into the ethical miasma of flouting these rules or mention the exhaustive number of readers who lead double lives as booze smugglers. We will say that, if you're discovered sneaking alcohol onboard the stricter cruise lines, you might be shamed in front of fellow passengers and made to report to the "naughty room." Be warned, most of these lines will also throw away any confiscated alcohol, which means you won't get it back at the end of your cruise. (Exceptions are alcohol purchased onboard or in port and brought onto the ship. Those bottles will be held and returned to passengers, generally on the night before disembarkation or on the morning of.) If you do want to bring a favourite drink, wine is almost always an allowable substance, though lines might limit how much passengers bring and often charge corkage fees for consuming it outside of one's own cabin.

Happily, the British love of a decent tipple has led to many major U.K. cruise lines taking a more relaxed attitude to bringing alcohol onboard. While Fred. Olsen remains stoically strict, companies such as P&O Cruises and Thomson Cruises have a far more relaxed attitude to BYO booze, providing the quantity brought on is not deemed to compromise the "health, comfort, safety and enjoyment of passengers".

Instead, Pack: Water and Soft Drinks

If it's nonalcoholic beverages you're after, many lines let you bring on a "reasonable" amount of bottled water and soft drinks -- and even a cooler to contain said items (if there's no mini-fridge in the cabin). Some lines (such as Carnival), however, have begun banning nonalcoholic bottled beverages and now require those drinks to be brought onboard in cans. Book worms can easily spoil their perfect packing jobs with multiple, heavy tomes -- or drive themselves crazy whittling their selections down to just a couple of titles. Our advice: Bring one at most. Ships have libraries, and passengers are often surprised by the quality of the selections. Celebrity's Solstice-class ships and Cunard's Queens come to mind as ships with decent book repositories.

Instead, Pack: An E-Reader

As sentimentalists, we prefer the feel, smell, taste and weight of real books, but we also like having options, which e-readers provide. Even Luddites begrudgingly admit how easily they acclimate to a Kindle or Nook. Plus, you have to give in to peer pressure -- everyone else on the sun deck is cradling an e-reader, so why shouldn't you?

5. Don't Pack: Toys That Will Get You in Trouble

If just the thought of walking from one end of the Lido Deck to the other makes you tired, it might be tempting to pack Heelys (or other footwear with wheels) or wish you could bring along your very own Segway. Don't try it. While it might seem obvious to most cruisers, items that could be launched off the ship, including kites, drones, boats or canoes, are also prohibited onboard. With so much to see and do on the ship, you won't need these extras anyway.

Instead, Pack: Handheld Video Games or a Travel Board Game

If you're cruising with children on a ship where you think they might be easily bored, handheld video games are allowed -- and likely essential. Although many ships have a few board games available for use, the selection is often slim, and you might find that pieces are missing. Packing a deck of cards or a game that can easily fold up into your luggage is always a safe bet. Better yet, book on a cruise ship with a rock-climbing wall, zipline, water slide, ropes course, ice skating rink, skydiving or surfing simulator, bowling and/or bumper cars, and you really won't have to pack any entertainment options at all.