You may also like
Dismiss
Top 5 Luxury All-Inclusive Cruise Lines
Best Foodie Cruises
Daytime Activities on a Luxury Cruise: What to Expect
Which Shows Are on Which Norwegian Cruise Line Ship?
Adventure Ocean on Royal Caribbean Cruises
Can I Play Bridge on a Cruise?
Best Mother's Day Cruises
Why Crystal Is the Luxury Ocean Cruise Line for You
Cruise Activities You Can Re-create at Home: Virtual Cruising and Meetups
Best Cruise Cookbooks 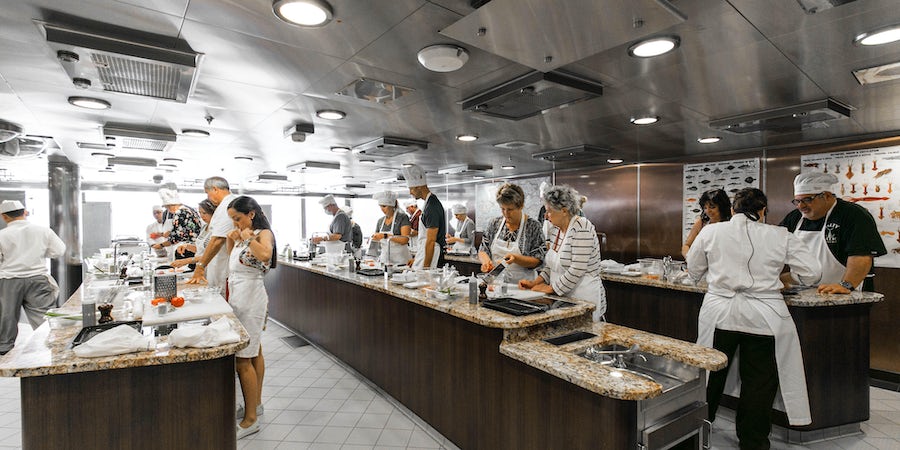 Culinary Center on Oceania's Riviera (Photo: Cruise Critic)
Gary Buchanan
Contributor
Travel broadens the mind, they say, but most cruise companies offer the opportunity to feed it too by employing specialist guest lecturers to deliver a range of enrichment programmes. Celebrated authors discuss their best-sellers; diplomats and politicians give a perspective on world events; learned professors bring foreign cultures to life and scientists or explorers reveal insights into the natural world. While some lectures comprise of a genteel romp through history, others can be a little more challenging, but they are always fascinating.
On This Page

Theme: Specialises in US and British political and diplomatic heavyweights.

Details: The collection of themed voyages ranges from food, wine and wellness to music, theatre and film. The noted experts and celebrated personalities on board educate and entertain. The "Crystal Wine & Food Festival” sailings attract the hottest stars of the culinary world, while the “Crystal on Broadway" voyages showcases top talent from premiere shows. "Spotlight Cruises" include specialty voyages featuring oceanographer Jean-Michel Cousteau. The renowned oceanographer, explorer and founder of the Ocean Futures Society shares tales from his lifetime of underwater exploration, puts forth his vision for a healthy blue planet, and discusses the legacy of his famous father -- the legendary Jacques Cousteau. Your Food’s Journey On Oceania Cruises - Behind The Scenes Video

Why Foodies Will Love An Oceania Cruise - Video Tour

Details: Cunard's 2017 roster of high-calibre speakers on Queen Mary 2 includes Anthony Horowitz, one of the most successful writers working in the UK. He has created some of the UK’s most popular TV series, including Midsomer Murders. He is also the writer and creator of award-winning drama series Foyle's War and has written more than 40 best-selling novels.

Theme: Insights to Hebridean Princess' cruises round the Highlands & Islands of Scotland.

Details: On the nine-night "Treasures of Normandy and the Channel Isles" sailing departing London on 8 August 2018, Rear Admiral John Lippiett -- Chief Executive of the Mary Rose Trust -- will discuss Britain's colourful maritime history. During the 10-night "British Isles Explorer" cruise from Portland on 17 August, scientific photographers Paul and Lucy Kay will share their expertise in exploring and photographing the underwater world. Olympic cyclist Chris Boardman will be on the seven-night "Cycling over The Minch" cruise departing Oban on 9 October 2018; he will also accompany cyclists on rides on Tiree, Barra, The Uists, Raasay and on the Sleat Peninsula on Skye.

Related: Which Round-Britain Cruise is Right for Me?

Sample cruise:The seven-night "Architectural Gems of Argyll and The Isles" cruise on Hebridean Princess departs Greenock on 30 October 2018. Prices from: £2,650.

Theme: Passengers can experience more of the world’s natural wonders, test their knowledge of our planet and participate in family-friendly competitions through HAL’s exclusive partnership with BBC Earth.

Details: On every Holland America Line cruise "Frozen Planet Live" offers a ground-breaking concert based on the BBC Earth "Frozen Planet" series, staged to live classical music as guests are taken on a journey into the wilderness of the Polar Regions. "What on Earth?" is an entertaining and enlightening family game show, which uncovers all that's weird, wonderful and obscure in the natural world. "Inside Earth" films offer an insight into how the BBC's extraordinary content is captured, featuring personal tales of the challenges and wonders faced by the crew. "BBC Earth for Club HAL & Tweens" is full of amazing facts about animals, dinosaurs and sea creatures for kids to enjoy.

Details:  Oceania Cruises has enhanced its array of immersive, culinary experiences with new "Culinary Discovery Tours" across the globe. These tours provide passengers with an interest in gastronomy to interact with local culinary experts by exploring local food markets, take part in tuition in prestigious cookery schools, and savour specialities in renowned restaurants. The array of choices includes lunch at Michelin-starred chef Reine Sammut’s Auberge La Feniere after a visit to the flower and vegetable markets in Aix-en-Provence. On cruises that include Athens, passengers can visit an open-air market, get lessons on how to prepare traditional Greek dishes, enjoy wine and ouzo tastings, and savour lunch at Varoulko, home to Greece's top awarded Michelin-starred chef.

Theme: Well-known names from across the world of royalty; entertainment; politics and sport.

Related: Daytime Activities on a Luxury Cruise: What to Expect

Details: Princess Cruises offers the chance to mingle and learn from knowledgeable experts who share their experiences during cruises which are part of the "Discovery at Sea" partnership with Discovery Communications. The enriching events feature regional destination specialists, as well as naturalists and experts in their fields. There's also quite a smattering of celebrities – next year look forward to Linda Gray (Sue Ellen in Dallas), Pete Best (ex-Beatles drummer), Eddie "the Eagle" Edwards and Harry Redknapp, to name but a few. "Encounters Naturalists" draw on a rich collection of personal adventures to bring scientific knowledge to life whether it be trekking the Alaska backcountry to diving into the wonder of Hawaii's deep sea reefs.

Sample Cruise: The seven-night "Voyage of the Glaciers" aboard Island Princess sailing from Vancouver to Whittier (Anchorage) departs 5 September 2018. Prices from: £899 cruise-only.

Theme: Occasional interactions with television personalities, as well as enrichment from destination specialists.

Details: Saga Cruises always try to fit in the enrichment talks about the destinations to be visited during selected cruises. Experts add another layer of interest, so once ashore guests have a greater appreciation of the local culture and history. Speakers also often regale intriguing stories behind the artwork in galleries, famous figures in history and celebrity hang-outs, to the best places to buy local delicacies or souvenirs. Enrichment talks are often linked to themed cruises such as wildlife and bird watching, art history, archaeology, gardens, explorers, politics and famous battles. The lecturers can range from the former boss of MI5 to newsreaders, ex-military chiefs to TV gardeners and pantomime dames.

Theme: Renowned politicians and learned scholars from the arts, sciences, politics and the humanities.

Details: Author and lyricist Sir Tim Rice has earned awards at the Oscars, Golden Globes, Tonys and Grammys. He will be aboard Seabourn Quest on 13 January 2018 to talk about his career including his collaborations with Andrew Lloyd Webber on Jesus Christ Superstar, Evita and more. His production show, “An Evening With Tim Rice”, is currently playing fleet wide on all Seabourn ships.

Sample cruise: Jeffrey Archer wrote his first novel, "Not a Penny More, Not a Penny Less" in 1976 at the age of 34. He has gone on to sell more than 100 million books and is now published in 97 countries. He will be discussing his colourful career on board Seabourn Encore on a seven-night "Romance of the Rivieras" cruise departing Barcelona on 18 August 2018 and sailing to Civitavecchia (Rome). He will also be sailing on Encore for the next seven-night "Alluring Italy & Riviera" cruise from Civitavecchia to Barcelona on 25 August 2018. Prices for both cruises from: £3,499. Theme: Popular with travellers who want to understand more about the history, culture and natural wonders of the ancient world.

Details: Although Voyages to Antiquity only has one ship, Aegean Odyssey, its impressive roll-call of guest speakers on cruises to the Mediterranean, Northern Europe, the Caribbean and Mexico are all specialist historians, geologists, wine connoisseurs or wildlife experts. New for 2018 is a series of six, one-week cruises in Cuba between January and March that feature the major cities of Havana and Santiago de Cuba as well as more offbeat destinations like Cienfuegos and Trinidad. Guest speakers include Charles V. Barclay -- a member of the U.S. diplomatic corps for 28 years. Also on board will be Tony Kapcia -- Professor of Latin American History at the University of Nottingham since 2003, where he directs the Centre for Research on Cuba and its international network of specialists -- the Cuba Research Forum. Retired Diplomat John Dew will also impart his expertise which began in Venezuela in 1975. After postings to Paris, Dublin and Madrid, with intervals in the Foreign and Commonwealth Office in London, he headed the Latin American and Caribbean Department of the FCO from 2000 - 2003.