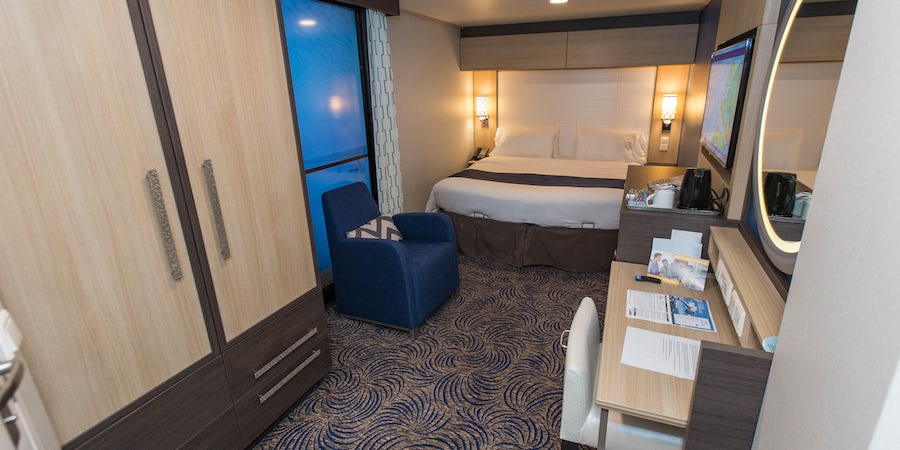 The Interior Cabin with Virtual Balcony on Anthem of the Seas (Photo: Cruise Critic)

Spend my holiday in a tiny, windowless cabin? No, thank you!

But guess what? Modern cruise ships are full of inside cabins -- the smallest, cheapest staterooms, generally lacking in windows and tight on space -- and people book them. On some sailings, cruise lines will fill every one.

Why would booking this type of cruise room be a good idea? We list seven times when an inside cabin is the best choice.

1. You're on a Tight Budget

Let's start with the obvious: You can get an incredible cruise holiday for a shockingly low amount of money if you book an inside cabin. We've seen inside cabins priced from £50 per person, per night; while deals that low are reserved for special sales, you can often find insides from £100 or less per person, per night. That fare includes not only your room but also food in select restaurants (including the main dining room and buffet), entertainment onboard and use of pools and water slides. If you're short on cash, but need a getaway, an inside cabin gets you access to most of the wonderful amenities found on mega-ships. 2. You Don't Spend Much Time in Your Cabin

If you go on cruises to explore ports, hang out at the pool or party all night long, chances are you're only spending time in your cabin to get dressed and sleep. Why waste your hard-earned cash on a big balcony cabin if you'd rather lounge on a top deck than sit in an upright deck chair all by yourself on your veranda? If alfresco cabin amenities are wasted on you, pick the inside and let balcony-lovers book the bigger rooms.

3. You're Light Sensitive and Want to Sleep in on holiday

Inside cabins are dark. Turn off the lights and you have no idea if it's the middle of the night or high noon. To some, this sense of timelessness is disconcerting. But to others, it's the best sleep aid in the world. If you like it dark when you sleep and don't want sunlight creeping in around blackout curtains to wake you up, an inside cabin is definitely for you. This is especially the case in regions of the midnight sun -- like Norway or Iceland -- where the sun doesn't set until the wee hours of the morning and rises not long thereafter. 4. You Want to Spend Your Money in Other Ways

Even with a large cruise budget, you might not want to prioritise a fancy cabin over other indulgences like spa treatments, shore excursions or shopping opportunities. Downsizing from a balcony cabin to an inside room can free up hundreds of pounds you can use to splurge on that couples massage or flightseeing helicopter tour. Perhaps, you'd prefer to use the money to fund your poker habit at the onboard casino or keep the wine flowing at dinner. Spend money on the most important parts of your holiday -- and if you skimp on the cabin, that's OK.

5. You Want an Unusual View

News flash: Not all inside cabins are windowless. Royal Caribbean is the leader in inside cabins with a view. Several of its ships have rooms that overlook the interior Royal Promenade shopping mall. Others have virtual balconies -- floor-to-ceiling LED screens that display live footage from outside the ship, creating the sensation that you're looking out a window. Disney Dream and Fantasy offer similar inside rooms with "magical portholes" -- small, round video screens that show exterior views as would a real porthole window. And on Carnival, some cabins labelled as inside, actually have porthole windows (though sometimes with obstructed views). Carnival's 1A cabins are a grab bag of quirky cabin designs. They may share a category and be considered "insides," but that's where the similarity ends. Some have two standard beds (that can combine into a queen), while others have one bed and either a sofa bed or a pulldown bunk bed. Some have no views, while others have portholes or even picture windows. If you want something out of the ordinary for a low price (these cabins are favoured by solo travellers, too), these inside cabins might be a good choice for you.