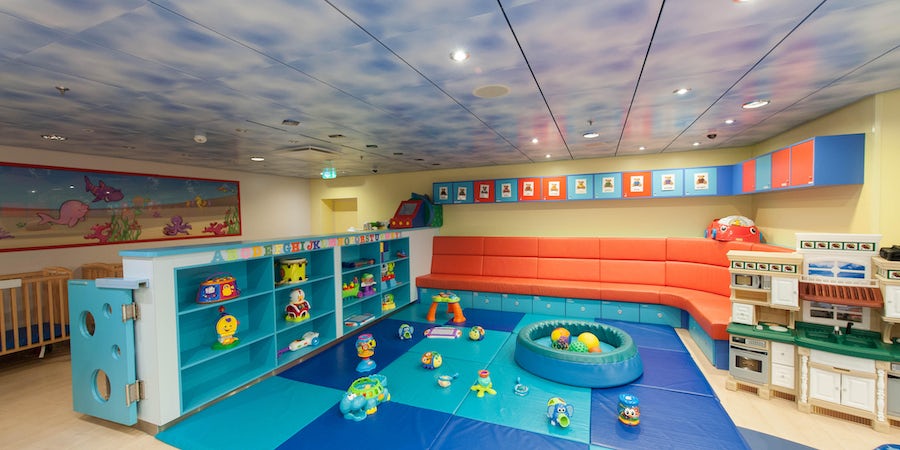 On many cruise ships, kids younger than 3 do not have play spaces and programming tailored to them. Royal Caribbean is different and offers the Royal Babies and Tots Nursery and play groups for the littlest cruisers.

The physical Royal Babies and Tots Nursery is available on many, but not all, Royal Caribbean ships. The size and amenities vary by ship, but all offer a play space and a nap space (with cribs, cots and strollers) geared for kids ages 6 to 36 months. Expect soft play areas, toddler-appropriate toys and interactive activities and video screens playing cartoons and TV shows aimed at the under-3 set.

On ships with nurseries, parents can pay by the hour to drop off their kids in a day care setting. Nursery staff are certified and trained in accordance with Florida state regulations (so the same as on-land child care workers). They can give bottles, feed children and change diapers. Numbers of staff and spaces for kids vary by ship, but there are always at least two caretakers in the nursery. The ratio of staff to kids must be at least one staff member for every three babies, one to four for toddlers. Nursery hours for drop-off vary by ship.

In addition, parents are allowed to pre-reserve a certain number of hours for their children on embarkation day (but not before boarding); the exact amount of time allowed varies by ship, due to space and staff available. Any remaining slots are available on a first come, first served basis after day one. To make sure you get the times you want, head to the nursery as soon as you can on the first day of your cruise.

If you don't want to drop off your little ones but are looking for a safe and fun place for them to play, Royal Caribbean's Royal Tots program can often accommodate. Quantum- and Oasis-class ships have a dedicated open play area, in addition to the nursery, where children under 3 can play. Babies and toddlers must be accompanied by an adult member of their travel party. On other classes of ship, open play is available in the nursery if no children have been dropped off or staff might create a play area in an unused part of the teen center or other public area.

All ships across the fleet host Royal Babies and Royal Tots interactive playgroup sessions, with songs and games. Each session is dedicated to a specific age group (6 to 18 months, 18 to 36 months) and is hosted either in the nursery area or in a shipboard lounge by youth staff. Parents must accompany children to these events. The timing and frequency of these playgroups vary by ship, itinerary and sail date.

In addition, all Royal Caribbean cruise ships offer a toy-lending program. Families can inquire at the nursery, or the Adventure Ocean kids club on ships with no nursery, to ask about borrowing a bag of toddler-appropriate toys to take back to the cabin for the duration of the cruise. There's no fee to borrow toys.

Royal Caribbean's Royal Babies and Tots Nursery is available on the following ships:

All ships have the interactive Royal Babies and Tots play groups led by youth staff.

See photos of the Royal Babies and Tots Nursery on Harmony of the Seas.