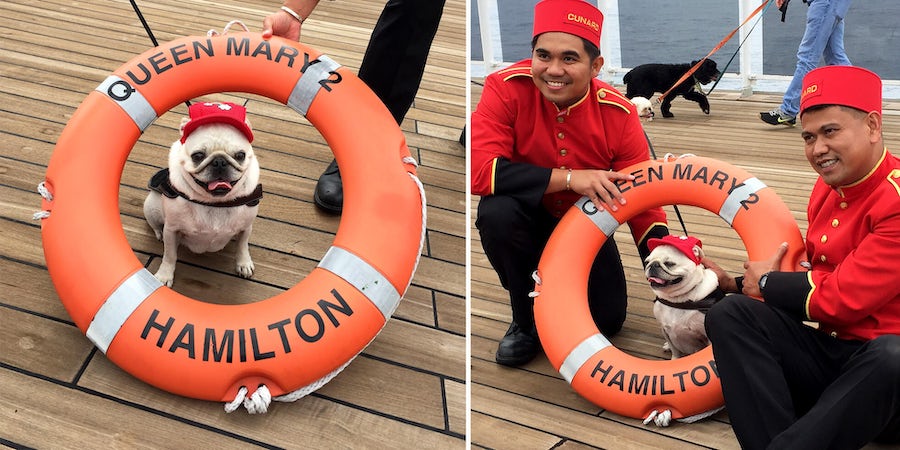 Unless you've got a service animal, it's not typical to be able to cruise with your dog or cat-- but it can be done. If you're traveling with Cunard, kennels are a unique offering on Queen Mary 2.

In keeping with the line's classic ocean liner image, the QM2 kennels are reminiscent of a bygone era that saw passengers moving between Europe and North America, sometimes with their pets in tow. Below, we'll tell you all you need to know about the kennel offerings and how you can go about reserving a spot for your furry friend.

To snag a spot for your pet, you'll need to book at least a year in advance. You can do this by contacting Cunard or your travel agent.

When you book, you'll have to provide a full profile of information on each pet, including any medical conditions and corresponding medications (which you'll have to bring onboard with you), feeding requirements and dietary restrictions.

Be aware that the maximum number of animals accepted per voyage is 24, and the kennel master tells us that capacity is generally at 90 percent on each sailing, so space is extremely limited.

Related: Why G Adventures Is the Expedition or River Cruise Line for You

Prices charged are per cage, and only one animal is allowed in each. Large cages (for large breed dogs, such as golden retrievers) are $1,000 each, while small ones (for small dogs) are $800 each. Note that cats can be accommodated, but they require two cages -- one for the cat and one for its litter box -- so the cost is $1,600.

's kennel master, responsible for making sure all animals are properly cared for. He's held the position for nearly a decade, and before coming to Cunard, he served as a zoo guide at the largest zoo in the Philippines.

Because the kennels are a division of the onboard housekeeping department, Oliver and his assistant report to the head of housekeeping.

In addition to a cage with bedding and regular feedings (bowls provided), each dog -- cats stay inside -- is allotted outdoor exercise time in a gated area on Deck 12 aft. In a nod to the ship's classic transatlantic sailings between England and the United States, the area is outfitted with both a lamp post and a bright red fire hydrant, so dogs can choose the type of "toilet" that's most familiar. (Generally they're let out between 3 and 6 p.m. daily for anyone hoping to catch a glimpse.)

Additionally, there are set visiting hours four times each day -- 8 to 10 a.m., 11 a.m. to noon, 3 to 6 p.m. and 8 to 8:30 p.m. -- so owners can spend time cuddling and playing with their fur kids. Owners can choose to feed and "walk" their own pets during those times or have the kennel master lend a hand.

On one morning during each sailing, a professional photographer offers pet parents the chance to do a photoshoot with their pet(s). Various props are available, including dog-sized QM2 jackets and a giant life ring with Queen Mary 2's name printed on it. The kennel master and his assistant dress in Cunard's signature red bellhop uniforms for the occasion, and miniature versions of the bellhop hats are on hand for pooch use.

In terms of food, Cunard is able to provide some varieties onboard, but owners are advised to check during booking. If a specific food cannot be provided, owners are responsible for bringing enough onboard for the duration of the sailing. And, as if these pets weren't already pampered enough, their parents can order them special treats from room service -- including chicken and steak -- to be delivered to the kennels.

We hate to mention it, but in the event of an emergency, pets have their own life jackets and muster stations, and the kennel master is in charge of making sure all protocols are properly followed.

Although passengers can see the dogs when they're let out to roam from 3 to 6 p.m. daily on the public sun deck on Deck 12, gates prevent passengers from mingling directly with the animals. Following each voyage's photo shoot, owners often parade their dogs around in the public area outside the gates on Deck 12. If you're hoping to pet and play with the dogs, that's your best opportunity, but be sure to get owner permission first.