You may also like
Dismiss
Sail Across the Sun Theme Cruise With Train
Jane McDonald, Rob Brydon and 12 Other Cruise Line Celebrity Ambassadors Making a Splash at Sea
Monaco Grand Prix Cruises
Sailaway With Jane McDonald Cruise
Jazz Cruise: Dave Koz and Friends at Sea
Festival at Sea: Immerse Yourself in African American Culture on the High Seas
Rock Cruises for Music-Lovers
9 Reasons to Get Excited About P&O Cruises' Iona
Chocolate-Themed Cruises: Who Offers Them and Where Do They Go?
The 10 Most Popular Episodes of “Cruising with Jane McDonald” 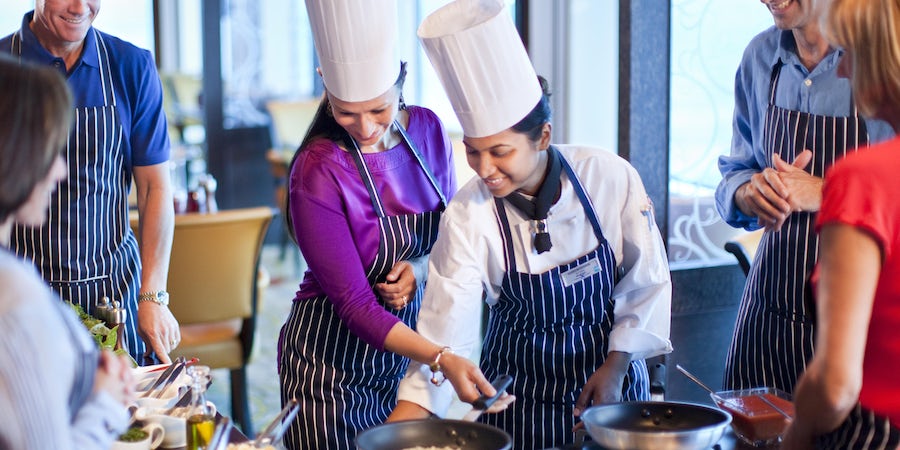 A culinary themed cruise hosted by Celebrity Cruise Line (Photo: Celebrity Cruise Line)
Jeannine Williamson
Contributor
Where better to immerse yourself in your cherished hobby, recreation or entertainment with like-minded people than on a leisurely cruise? Whether a jazz buff or enthusiastic gourmand, an avid golfer or hooked on nineties music, a yoga devotee or dedicated dancer, chances are there's a theme cruise for you.

Theme cruises have become so popular they now span a wide spectrum of interests and topics. These special sailings can be the perfect incentive for cruise newbies, as well as die-hards who fancy getting insight into their favourite pastime.

When considering a theme cruise, remember that they can be broken down into three categories:

Full-Ship Theme Cruise: Choose your theme wisely because it will set the tone for your entire sailing. Everyone onboard can participate in the themed activities and entertainment, and every onboard venue is in use, from the pool-deck for concerts to the dining room, where special menus might be featured.

Full-ship theme cruises can be either fully chartered by an independent company or offered by the cruise line itself. For example, Sixthman, a theme cruise charter company that is now owned by Norwegian Cruise Line, offers fully chartered musical festivals, such as The Rock Boat and Cayamo. Throughout each cruise, passengers can enjoy concerts, themed activities, competitions and opportunities to mingle with performers.

Partial-Ship Theme Cruise: Not all theme cruises engulf the entire ship. Special interest groups can purchase a number of cabins in different categories and market to people who would be interested in the activity, which can range from wine to golf. These groups usually have little impact on the other holidaymakers onboard, although some of the public spaces may be taken over by the group.

Gay and lesbian cruises can be full-ship charters or groups booked on regular sailings. You can find out more about these themed sailings here.

Theme-Inspired Cruise: Cruise lines commonly advertise themed sailings, but these tend to be regular sailings with some extra special-interest activities or guest speakers added to the usual programming, such as P&O Cruises' Food Heroes sailings. On these cruises, you might have a regionally inspired wine tasting or guest musical performer onboard. Paul Gauguin Cruises, for instance, features appearances by oceanographer and environmentalist Jean-Michel Cousteau throughout the year. On these select sailings, Cousteau offers lectures and accompanies dives from the ship.

Below are some of the latest cruises on offer for 2020.

Date: Marco Pierre White will host excursions on a seven-night sailing onboard Iona, departing on August 1, 2020, from Southampton to the Norwegian Fjords.

Details: P&O fans with a penchant for celebrity chefs will want to bag a cabin on one of the line's cruises with chef Marco Pierre White, patissier Eric Lanlard or wine expert Olly Smith, who will host a series of foodie-themed sailings in 2020, following their popular voyages in 2019. Spanish chef Jose Pizarro, Norwegian chef Kjartan Skjelde and photographer and cook Marte Marie Forsberg will join P&O Cruises' Food Heroes for the line's new flagship Iona launching in May 2020. Food Heroes take passengers on tours to learn about local food delicacies and offer cookery classes in partnership with restaurants in port. These sailings also feature onboard cookery demonstrations, masterclasses, hosted dinners, book signings and Q&A sessions.

Related: Which Cruise Ships Will Be Doing Test Cruises and When Do They Set Sail?

Details: SeaDream Yacht Club's popular "Wine Voyages" feature a scattering of wine-themed sailings in the Caribbean during the winter months before returning to Europe for the summer 2020 season. The seven-night sailings (plus one eight-night trip) take place on both of the line's ships, SeaDream I and SeaDream II and take in some of the world's richest wine regions in the heart of the Med. Wine Voyages includes visits to vineyards, wine tastings and the popular Winemaker Dinner, featuring expertly-prepared local dishes paired with wines from visited ports.

Details: This 13-day voyage on Hapag-Lloyd Cruises' Europa 2 takes in the stunning Spanish coast, starting in Tenerife and ending in Barcelona. Golf enthusiasts will get the opportunity to play on a variety of golf courses, while also visiting ports such as Madiera, Lisbon and Valencia. Hapag-Lloyd is a German cruise line, though this sailing will be conducted in English and German.

Related: The Most Luxurious Cruise Line You've Never Heard Of

Details: Silversea's 21-day Monte Carlo Grand Prix tour has been designed to coincide with two of the most glamorous events in the world: Cannes Film Festival and Monte-Carlo Grand Prix. The Mediterranean Cruise from Venice to Barcelona onboard Silver Spirit loops around the Adriatic, joining the dots between lesser-known spots in Italy, Slovenia and Malta before making its way to Barcelona. The cruise showcases the glitz and glamour of the French Riviera, so pack to dress accordingly.

Details: Passengers onboard Celebrity Infinity's 12-night cruise from Barcelona, can rub shoulders with the rich and famous at the Cannes Film Festival. They will indulge in the epitome of A-list Hollywood glitz and sophistication by attending an exclusive VIP rooftop celebration ashore with live French music and cocktails while overlooking the picturesque harbour. Onboard, guests can enjoy "Celebrity Cruises' Film Festival" -- a celebration of past Cannes Film Festival winners -- and watch live presentations from a film historian. The film-themed cruise takes in an overnight stay in Cannes during the festival; plus stops in Florence/ Pisa, Rome, Naples, Palermo, Malta, Marseille, Sete, before returning to Barcelona. Tickets to the Film Festival are not included.

Details: During this stylish seven-night transatlantic crossing from Southampton to New York on Cunard's Queen Mary 2 passengers will enjoy catwalk shows, "audiences with…" talks, hosted dinners and more. The crossing will host American designers Badgley Mischka -- and in a fashion first the company will launch its new collection onboard to provide passengers with an exclusive preview -- and design Mark Badgley and James Mischka, hailed by Vogue as one of the "Top 10 American Designers" and as the darlings of the Hollywood set.

Details: This three-night sailing aboard Marella Explorer 2, departing from Newcastle, will feature big-name acts and DJs from both decades that will go head to head onboard the line's adult-only ship, Marella Explorer 2. Passengers can also expect retro film screenings, parties and fancy dress nights -- so don't forget your best crop tops, pedal pushers and platforms. The cruise will call at Ijmuiden in Holland (Amsterdam) and Zeebrugge (Bruges) in Belgium, before ending in Southampton.

Details: French TV host, poet, writer and journalist Alain Dualt will be the special guest onboard the new Opera at Sea itinerary on Ponant's small luxury ship, Le Jacques Cartier. The musical cruise, which is in partnership with the Royal Opera of Wallonia, will cruise from Iceland to Ireland during this exceptional journey. The eight-day circuit, via the Hebrides and the Isle of Skye, is a celebration of cultural riches set to a dramatic soundtrack created by singer Jodie Devoc, pianist Elsa De Lacerda, violinist Marie Hallynch and cellist and trumpeter Michael Tambour. In addition to the convivial atmosphere onboard, the cruise will be a tour of discovery around Northern European islands, from the postcard-perfect setting of Reykjavik, the most northerly capital in the world, to the lesser-known port of Heimaey, the only inhabited island in the Westman Islands.

Details: TV's queen of cruising Jane McDonald is exclusively chartering Anthem of the Seas and inviting fans to join her on a seven-night Mediterranean sailing where she will perform two shows, host a live Q&A session and mingle with passengers. Organised in partnership with specialist ship charter company Floating Festivals, the round-trip Southampton sailing will call at Cherbourg in France, Vigo in Spain and Lisbon in Portugal. Jane's trio of backing singers, The Bluebirds, will perform their own show during the sailing, and passengers can also see Royal Caribbean's "We Will Rock You" West End-style performance.

Details: This 10-day culinary cruise onboard Oceania's Marina, from Venice to Rome, is hosted by master chef and executive culinary director for Oceania Cruises, Jacques Pepin. Guests will be treated to a selection of specially-designed signature menus, culinary lectures, and demonstrations from Claudine Pepin who is a respected chef and cookbook author.