You may also like
Dismiss
Which Shows Are on Which Celebrity Cruise Ships?
How to Make Friends on a Cruise
Top 8 Things You Can Do on the Cruise Critic Message Boards to Enhance Your Cruise
50 Years of First Royal Caribbean Cruises
Cruise Activities You Can Re-create at Home: Virtual Cruising and Meetups
6 Cruise Memories That Will Warm Your Heart
Cruise Critic Members Shout Out a Few of Their Favorite Crew
Weaving 'Herstory': Q&A With the History-Making International Women's Day Cruise's Female Officers on Celebrity Edge
What Cruise Destinations Are People Booking for 2021 and Beyond?
What Happens to Cruise Ships That Are Slated to Be Broken Up? 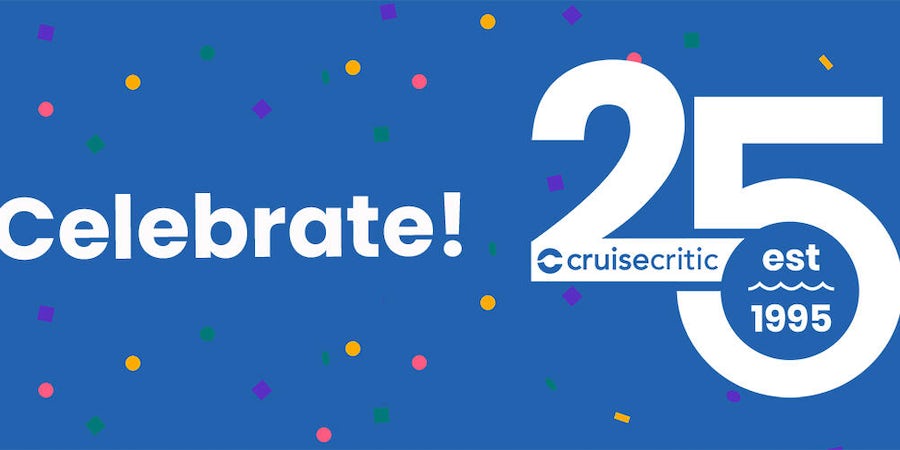 Roll Calls. Meet & Mingles. Slot Pulls. They're just three of the things Cruise Critic board members have been enjoying and participating in since Cruise Critic was first launched 25 years ago.

The year was 1995. The O.J. Simpson trial was the hottest thing on television for those who weren't trying to figure out who shot Mr. Burns. Kevin Costner's Waterworld debuted as the most expensive film ever made. The most popular album of the year was released by Hootie and the Blowfish.

And in 1995, a little site called Cruise Critic quietly debuted on the internet, as part of America Online, or AOL.

A lot has changed in the cruise world since then, but regardless of when Cruise Critic members first discovered the site, the stories of how they grew their knowledge and made fast friendships have proven timeless.

Earlier this year, we asked Cruise Critic members to share memories of the past two and a half decades with us. Here are some of their stories.

"I found Cruise Critic back in 2005 as I was preparing for my Celebrity cruise out of San Juan," writes olemissreb. "I found our Roll Call and got to chatting with several people on there. When we finally met up at the Martini Bar, I felt like we had all been friends forever."

"I'm pretty sure we were on a Royal Caribbean cruise early in our cruising history and a group of the Cruise Critic hosts were onboard," recalls Host Anne. "In speaking with them over the course of the cruise, I learned a lot about Cruise Critic and quickly became addicted thereafter. I'm pretty sure when I joined there were less than 10,000 members of Cruise Critic.

"Today, there's a whole lot more members. It wasn't long after that Royal Caribbean cruise that I was offered the chance to moderate the Celebrity board here on CC. Twenty years later, I'm still doing it."

Others spoke of making lasting friendships and connections onboard.

"Cruise Critic is a great resource for meeting others," writes Coralc. "We met a wonderful couple on an Australian (transpacific). When they next visited the US, they stayed with us for a few fun packed days. We will stay with them the next time we visit Australia.

"Cruise Critic has been very rewarding for us."

"Cruise Critic was so important to my cruising experiences," writes dzboss1. "I met so many people through our Meet and Mingles, and still stay in touch with quite a few of them. Every cruise we booked, began with CC!!! I did many LIVE posts from the ships on CC and was thrilled to share my adventures with others and answer any questions they had."

Members have also used Cruise Critic over the years to help one another with more than just information on cruises. Member Aquahound found a camera washed up in Key West, Florida, filled with photos of diving in Aruba and came to the Cruise Critic community to find the owner.

"There are so many good memories that have come from Cruise Critic, Meet & Mingles, etc.," writes Aquahound. " But if I were to pick my Number One memory, it would be my lost camera thread from back in 2009 (or maybe 2010) where Cruise Critic members helped me track down the camera owner in Aruba....who also happened to be a Cruise Critic member."

Others have been with Cruise Critic since the America Online days.

"I’ve been a Cruise Critic member since AOL," writes Got2Cruise. "I’ve met some really nice friends through the Meet & Mingle. Arranged some great private tours. Learned lots. Fun fact, my Mom bought herself a computer and got the internet just so she could join Cruise Critic."

Have a memory of your own Cruise Critic experience you'd like to share? Join the discussion here.