You may also like
Dismiss
15 Things That Drive You Nuts on a Cruise and How to Be Zen About Them
5 Best Cruise Costumes for Theme Night
On the Danube River: Two Longtime Pals Make Discoveries About Europe and Friendship
23 Things Cruisers Love to Complain About
50 Years of First Royal Caribbean Cruises
How to Survive a Cruise With Kids on an Adult-Focused Ship
Cruise Policies & Inside Information
Princess Cruises FAQ
MSC Cruises FAQ
Step By Step: How to Submit Comments on Cruise to the CDC 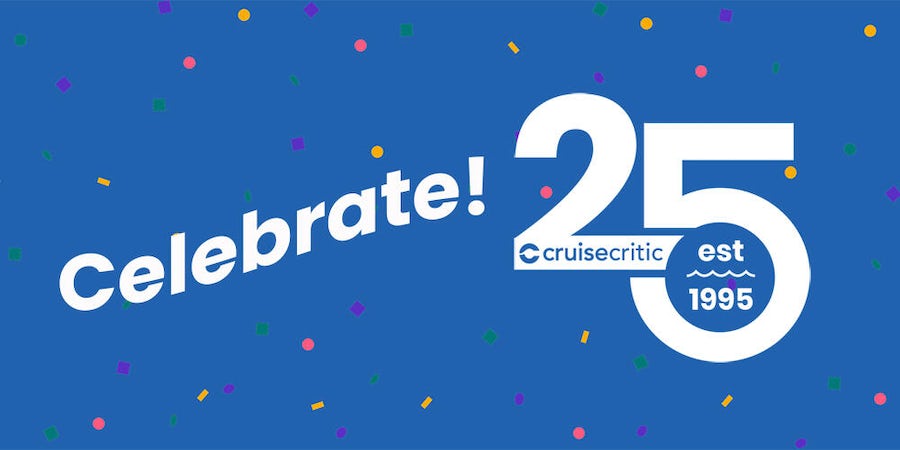 How Has Cruising Changed for You Over the Past 25 Years? -- We Ask Cruise Critic Members

A lot has changed in 25 years in the world of cruising, some of it for the better, some arguably for the worse depending on your point of view.

It was a very different time back in the mid-90s, when smoking in your cabin was permitted, dining choices were limited to the buffet and the main dining room and -- let's face it -- entertainment options onboard were pretty spotty.

Of course, there are some aspects of those halcyon days that some people miss -- dressing up for example (all but gone on mainstream lines) most evenings, being able to switch off entirely (no cell service or Wi-Fi back then) and smaller, more manageable ships that focused on destinations rather than onboard attractions.

And in 1995, a site called Cruise Critic made its debut on the internet, as part of America Online, or AOL, as a place for cruisers to swap stories, share tips and meet up onboard.

Earlier this year, we asked those members to tell us how cruising has changed for them over the past two and a half decades with us. These are their stories.

Dining is an area which has expanded in leaps and bounds over the past 25 years. Gone is the choice of two venues (the main dining room and the buffet), to be replaced with a bewildering number of specialty restaurants themed around an increasing variety of cuisines on many of today's megaships (upwards of 20-plus different venues can be found on some on Royal Caribbean and Norwegian Cruise Line ships).

But with choice comes cost, and although you are not obliged to eat in the specialty restaurants, you are heartily encouraged to -- and prices now can shoot north of $75 per person in the fancier eateries.

One thing that hasn't changed (much) however is being "forced" to sit with strangers as Sailing12Away writes:

"At first I thought I was too young to be able to answer this as I felt I haven't been cruising for 25 years, but if I count my very first cruise when I was 8 on RCC then I suppose I meet the requirements.

I don't remember much about that trip, but I do remember eating meals at a large table with a bunch of strangers and I thought it was really weird.

"Fast forward 25 years, and I still think it's weird."

Marco writes: " Yes, it was quite different. All meals were in the dining room, save for one or two poolside lunch buffets."

Sanmarcosman thinks the changes in dining for the better: "Of course all the food outlets aboard today's cruise ships are a vast leap forward from our family ocean crossings as children and the cruises we booked ourselves later as young adults."

Neminem (who describes himself as a Xennial) writes: "I think it's gotten less stodgy, which I like, and more foodie."

But of course not everyone agrees it's gotten better, as arlybest writes: "Food used to be better. Crab legs, lobster nights in MDRs. Now you have to pay extra."

And of course there are a number of members who bemoan the demise of the Midnight Buffet, including Broadwaybaby123: "So I know that this is kind of wasteful, but I'd love to see the Midnight Buffet or at least the Grand Buffet make a comeback. It was nice to be able to get a little something to eat after the show.

"I miss all the excitement of the Grand Buffet as well. Just looking at all the artistry that must have gone into those carvings was INCREDIBLE!"

Being "Nickel And Dimed"

Beverage packages costing more than $80 pppd; specialty restaurants; additional tips etc. -- one thing that lines are accused of is nickel and diming passengers (some more so than others).

However, that's not something that VFR99 minds too much, as it means more choice:

"I honestly don't mind the nickel and diming too much because we can pick and choose what we want to pay for and customize our cruise vacation. But I do think the on-ship selling/upselling has become more of a pushy hard-sell which I don't appreciate, rather than a pleasant soft-sell which I definitely prefer."

But there is a good reason for this, as Marco explains:

"An above post talked about "nickel and diming". They have to. I recently was going through some old cruise memorabilia and I found a ticket from the 80's. The price of that cruise was $30 different than one we took 3 years ago for basically the same itinerary, length and cabin category. What else costs the same now as it did 35 years ago!?!?!? They have to generate revenue from other sources than the basic ticket cost."

And Tapi agrees with: "When I read posts from people who complain about the “nickel and diming” and the ever decreasing level of quality on today’s cruises, and who mourn the demise of the way cruising used to be, I like to remind them that they are choosing to pay considerably less today for an experience to match"

Dressing up every night is something many cruisers miss -- but for others the more relaxed approach pioneered by lines like Carnival and Norwegian is what they prefer, as ontheweb writes:

"One thing that has changed is it is less formal. I can say that not only has this changed for the cruise lines, but also our attitude, or at least that of DW[Dear Wife]. For our first cruise, she bought material and patterns and made her formal dresses. Now we plan on going to only whichever formal (or whatever less formal term they use for it now) night has lobster."

Btowncruiser agrees: "We do enjoy that the formality of cruising has softened over the years."

As does Harters, who writes: "We took our first cruise, with P&O, in 1988 and over the following year did two more. We became disenchanted with the formality - the set dining times but, more so, the dresscodes requiring the wearing of suits and dinner jackets. So we stopped cruising for a while.

"It is only in recent years that we've rediscovered it as a holiday. We took a short cruise as part of a longer holiday to Florida. This was with Norwegian which we enjoyed. It made us realise that you could do quite stylish, with decent food, without any need for archaic dress codes."

However, AFFirstSergeant loves getting dressed up: "We LOVE formal night (we live in Florida where 'dressy' means a shirt with a collar and long pants for men; a sundress for women). We enjoy getting dressed to the nines and having a night out that is formal. We don't care if others dress or not; their choice."

Yes ships have gotten bigger, considerably so. Back in 1996 the first ship to break the 100,000 ton mark -- Carnival Destiny -- launched, carrying 3,000 passengers. That ship still sails (though it's been completely refurbished and renamed Carnival Sunshine), but it would not be defined as "mega", more mid-size.

In 2009, Royal Caribbean launched a ship class more than double the size of Destiny in terms of both weight (225,000 tons) and passengers (almost 6,000) -- Oasis. Oasis of the Seas and its sister ships are still unrivalled in terms of size and passenger numbers.

But is this super-sizing for the better?

C-Dragons thinks it is: "The cruise industry has definitely changed over the years, especially with regards to the cruise ships' sizes.

"But this has been a benefit, in my opinion, providing added space for a wide variety of new activities and more choices for new dining experiences.

"Today it's nice to have so many ships to choose from that offer something for everyone's taste/budget."

Seashellstwo is not so sure: "Preferred the ships that ranged in size which accommodated 700 to 1500 passengers. Do not like the extraneous amusement park aspect of the larger ships or the feeling of being in a herd.

"We both believe we cruised during the best time to be a cruiser and could enjoy the ships before they'd become oversized and had lost so much of what being a ship should entail."

PaperGrandma agrees: "The super-size ships are too big."

Whereas GDanishspots is somewhere in the middle: "I like the bigger ships with more to do on them, but the huge ones are a little overcrowded."

Navybankerteacher writes: "Yes the ships are bigger - but somehow I preferred sharing a smaller ship with about 600 to 1000 others more than a much larger ship with perhaps 5000 others."

Cruise have come a long way from shuffleboard and Bridge in the past 25 years. Climbing walls, simulated surfing, zip-lines, waterslides, ice-skating, sky-diving, bumper cars, Broadway shows, rollercoasters! There's little you can't do or see onboard now.

Broadwaybaby123 writes: "The ability to offer a wide variety of activities on the larger ships are also a plus. I get to do things now on cruise ships that not many people can say that they've done.

"I can truthfully say I've been on waterslides in the middle of the ocean!"

Tazntom agrees: "The entertainment has continued to get better and list of activities have grown, I love the water slides but I adore The Ultimate Abyss."

TimesPrince harks back to simpler times: "We enjoyed playing ping-pong and miniature golf, although those are not always convenient nor available."

However, he does feel the entertainment has been "consistently excellent" throughout the years: "We enjoy having both shows and live music, even though there are now fewer bands onboard."

But in 25 years, there are some things that never change, as ontheweb writes: "One thing that luckily has not changed is that the passengers and crew are so friendly."

TimesPrince agrees: "Most of all the crew has been consistently excellent in our experience. The stateroom stewards are attentive and thorough, and we enjoy the moments when we hear about their lives and home culture. They are almost always deserving of an extra gratuity."

And as Marco beautifully puts it:

"Some things that haven't changed....sitting on a deck chair, looking out onto the horizon and listening to the hum of the ship as it glides through the water. The ocean is just as blue and the sun just as bright and watching a sunset or sunrise just as exhilarating."

A Final Word (and a shout out for Cruise Critic)

Bonsai3s takes us back 25 years: "I remember shooting clay pigeons and hitting golf balls on top of the ship into open waters.

"I remember my jaw dropping when I first saw the table setting in the Main Dining Room...I didn't know which fork. spoon, or knife to use first...I was lost. I remember a Sommelier asking me if I wanted wine...all I knew was table wine and asked for Sangria...I still cringe to this day thinking about that."

And gives a lovely shout out to Cruise Critic:

"The most important "change" for us was our introduction to Cruise Critic. I still remember our British friend, Gordon B. (May he rest in peace), who asked us: "Have you ever heard of Cruise Critic?" We said: "No, what is it?" We just want to take the time and say "Thank you" to all the experienced cruisers that genuinely help people and provide valuable information. Because of Cruise Critic and its members, we have lessen our mistakes, made planning even better and easier, have gotten current information, and have made long lasting friendships. Thank you Cruise Critic!.

Thank you Bonsai3s and all our other two million-plus members for being part of the CC family -- here's to another 25 years of cruising together!