You may also like
Dismiss
What We Know So Far About the CDC's Required Cruise Ship Test Sailings
Country Music Star Lee Greenwood to Play American Queen Steamboat Company River Cruises
Returning to Cruise Onboard a River Ship: Live From American Countess
Live From Royal Caribbean's Perfect Day At CocoCay: Come Now, and Spend Two Days
Cruising with Both Vaccinated and Non-Vaccinated Passengers: Just Back from Freedom of the Seas
Live From A Royal Caribbean Test Cruise: Onboard With The CDC
Live From the Allure of the Seas Test Cruise: No Drama, But Cheap Drinks, Free Waterslides
Royal Caribbean News: Entries To Be A Test Cruise Volunteer Taken Today Only
Live from Oasis of the Seas Test Cruise: Oasis is Back in New York 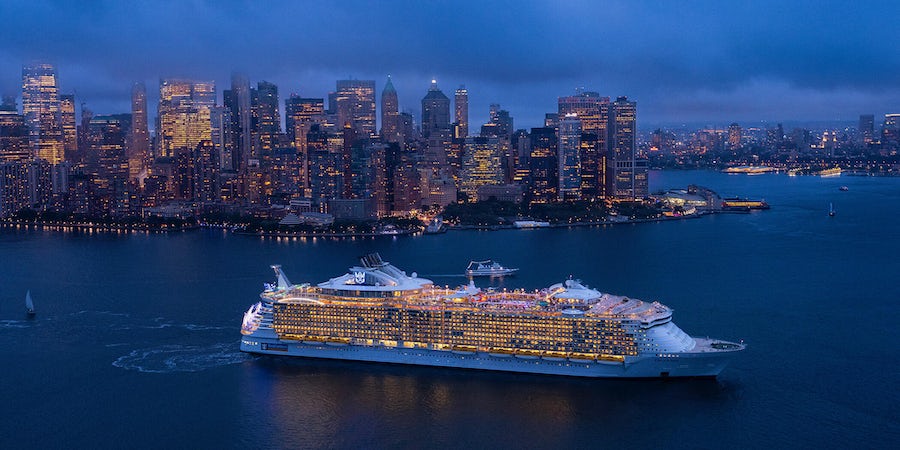 Oasis of the Seas departs on its test voyage on August 22, 2021 (Photo: Royal Caribbean)

Royal Caribbean Volunteers of the Seas Speak Out: How It Feels Being Back on a Cruise Ship

Oasis of the Seas departs on its test voyage on August 22, 2021 (Photo: Royal Caribbean)

(3:41 p.m. EDT) It has been over 24 hours since Royal Caribbean's iconic Oasis of the Seas left its new warm weather home port of Bayonne, New Jersey, officially making its Royal Comeback as it heads southbound in the Atlantic, bound for Perfect Day at CocoCay.

Onboard Oasis of the Seas, the decks have been abuzz with excitement: couples are racing down the Typhoon and Cyclone water slides; Playmakers Sports Bar has pre-season NFL games and Spanish La Liga football matches on and is serving up wings and beer to fans; the casino is alive with lights and sounds; and The Karlea Lynne Quartet brought the heat for over three hours inside the elegant Jazz on 4 Club.

The joyous energy aboard this test cruise is truly palpable.

I spoke to several Volunteers of the Seas passengers today about their experiences so far here aboard Oasis of the Seas, asking what it was like to be selected to be part of this simulated test cruise, which of the 50 percent off deals they plan on taking advantage of this week, and if they had any apprehension about cruising during COVID.

Becky Hackett, a veteran of eight cruises, eagerly drove three and a half hours north from Maryland to climb on board her fifth Royal Caribbean sailing. While we can easily imagine many cruisers extending their cruise vacation with a couple of nights in Manhattan, Hackett will be heading straight “Back to Mommy-hood because my oldest started school this week.”

On winning the Volunteers at Sea lottery:

“I literally screamed when I got picked! It's been such a hard year, with our travel restrictions as a military family and especially juggling virtual schooling and all that. Having a break before jumping back into the unknown was such a wonderful surprise!”

On her first evening on board the Oasis of the Seas test cruise:

“The first evening was fantastic. We had a great dinner in the Main Dining room as well as seeing the first production of 'Cats' anywhere in 14 months. I'm really excited to have a chance to explore all this ship has to offer and just have relaxing days at sea.”

On the test cruise’s 50 percent off deals:

“We are taking advantage of the half-off internet package, a couple specialty dining restaurants and all the fruity beverages.”

“I feel especially safe knowing that everyone is vaccinated I wasn't apprehensive about this cruise at all because I knew the vaccination rate of everyone onboard. I don't know if I would be ready to jump on another cruise where there would be a higher level of unvaccinated guests. I'm not sure I would trust unvaccinated people to follow the protocols as strictly and being in a confined space with people for that long could run a risk to my children more than anything, since they are too young to be vaccinated.”

Gene and Beth Ann DeAnne are loyal Royal Caribbean cruisers who had three sailings postponed due to the COVID-19 pandemic. While enjoying cocktails in the shade by the pool on deck 15, the Ocean City, New Jersey residents talked about their excitement to finally be back on a ship.

On the food so far:

“The main dining room offered a full menu for dinner, and had everyone spaced out for distancing. The food was really good. The lunch at Windjammer when we got on board had lobster tails on the buffet -- I could get used to that.” Additionally, the buffet feels safe, “Because we are being served instead of getting the food ourselves.”

On the test cruise’s 50 percent off deals:

“I think we might do some specialty dining but haven’t decided yet. We’re relaxing and taking it day by day.”

“We’re not nervous at all cruising during COVID. I like it that everyone is vaccinated. That for me was the key.” Beth Ann added she has family that aren't vaccinated, so she is more nervous around them than being here. Gene points out the fact that we are lathering up with hand sanitizer all over the ship, too.

“The optics are great. We see that the crew are immediately cleaning and sanitizing tables, and they’re probably doing even more that we can’t see to keep everything clean and everyone safe. Everything has been spot-on so far”

“We have three cruises booked for next year, so we are ready!”

Maria Grandinetti from Nashville is sailing on Oasis of the Seas for the second time, but first since its most recent refresh that added Portside BBQ and The Abyss slides, among other niceties. She recalled the first time stepping on board, several years ago, how her and her husband’s jaws dropped when they stood in the Promenade. They are loyal Royal Caribbean guests and drove into Bayonne on embarkation day.

On winning the Volunteers at Sea lottery:

“I was overwhelmed. We have never won anything, but we found at just nine days ago. My husband said, ‘Remember when we signed up for the lottery?’” We had to arrange for last minute dog care but we made the 14-hour drive from Nashville straight through.”

On the food so far:

“Yesterday was such a long day that we ordered room service for dinner but we are booked in the main dining room now, and may go to Giovanni’s [later this week].

On the boarding process:

“The check-in was a breeze. We got flagged but I think they were purposely flagging some people to practice the process. We had green check marks and were about to go but they called us back. I think they were making sure they triple checked everything.”

“Everybody is learning and they’re doing an amazing job. They are so nice and treating us like royalty. The crew is so happy to have us on board and be working at sea again.”

“Right now, safety is spot on. They are doing everything they can to make the cruise safe and enjoyable. There’s a lot of service (the ratio of crew to passenger is almost 2-to-1 on this test cruise).”

Cruise Critic contributor Jeff Bogle is sailing aboard Oasis of the Seas this week as it sets out on its first simulated voyage in 18 months.