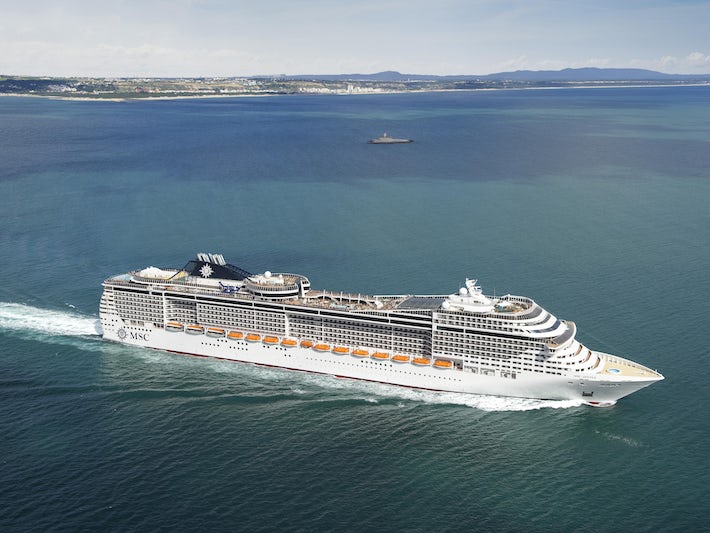 How does a Mediterranean cruise line pay tribute to Italian film legend Sophia Loren? By building a truly beautiful cruise ship, with nods to La Dolce Vita. Launched in 2012, MSC Divina stands out for the sheer attractiveness of its public areas. The atrium's two-story staircases glitter with thousands of Swarovski crystals -- a photo standing on the stairs is the ship's most popular selfie, we're told -- and similar glam touches are displayed throughout the vessel.

Excellent entertainment options and fun that lasts late into the night

Not much dining variety, compared to other mainstream cruise lines

Although its parent company has worldwide recognition with international cruisers, MSC still faces the challenge of name recognition in the United States where Divina is based. To that end, the line has courted Americans with several smart, wallet-friendly promotions specifically geared to Divina (and other Florida ships that the line has coming, such as Seaside). The first is a continuous offer to allow children under 11 to sail for free. And the second is a status match program where the line will honor passengers' status from their competitors. We met many people onboard new to MSC who had booked, based upon the offers -- and were happy with what they found.

When Divina had its first Miami stint, passengers noted that the line needed to adjust its service to American standards. MSC responded with a comprehensive crew retraining program, and that's evident in the ship's current iteration. The international crew we met were as friendly as we've seen anywhere else, and for the most part, our expectations were met, save a few staffing issues in some bars. The ship brings its entertainment staff -- and Italian officers -- out to dance with passengers at evening events.

In addition to more attentive service, we noticed the overall food quality has improved as well. We would have liked to see more variety in terms of complimentary dining options, but the limited options didn't put a damper on our experience.

One area where MSC has found success is with its ship-within-a-ship concept, the Yacht Club. With its own pool, restaurant and lounge -- as well as butler service and a host of other perks -- the Yacht Club is a true haven (and a spacious one, at that) where you feel far from the hustle and bustle. Not only that, but since you see the same small group of people day in and day out, the Yacht Club allows you to pretend there aren't 4,345 other passengers onboard.

Be the first to know when MSC Divina prices drop so you can book with confidence.

Another high point is the evening programming. Although Divina doesn't have Broadway shows, passengers applauded loudly for the twice nightly reviews full of music and acrobatics. Don't miss the Michael Jackson show, Starwalker. We also found the evenings packed with fun activities such as name that tune trivia, movies on the Lido deck (complete with popcorn) and enthusiastic theme parties (you haven't seen a White Party until you've seen hundreds of Brazilians participating in an exuberant line dance). Entertainment staff were everywhere, cheerfully encouraging participation. Discos and live music go late into the night, er, morning, and the tables near the pool are packed until late, Italian-style. You have to work hard to not have a good time.

Will all Americans embrace Divina's international vibe? No. MSC does not have the party hearty atmosphere of Carnival, nor the action-packed thrills of Royal Caribbean. But we met many North American passengers who enjoyed the diversity that Divina offers, at a reasonable price. With so many Italian touches, the ship almost offers two vacations in one -- and that's a bargain no matter what your nationality.

Although MSC Cruises prides itself on its international passenger base, the majority of passengers who sail Divina are North Americans. Other passengers might include English-speakers from the U.K., Ireland and South Africa. MSC has a large presence in Brazil and a good reputation in the Latino world; expect to hear a lot of Spanish, German and Italian while walking through the halls. Loudspeaker announcements are made in English only.

When school is out, families are common, especially as MSC lets kids younger than 11 sail free when sharing a cabin with two paying adults. Divina draws from a wide age range, and you'll see all types.

Daytime: During the day, shorts and tees are the norm.

Evening: Generally, the dress onboard is casual, though theme nights -- such as White Night, where all passengers dress in white, and Italian night, where people don green, red and white -- are common. At night, women typically wear sundresses or slacks or capris with blouses; men wear khakis or slacks and button-down or collared shirts. On gala nights, cocktail dresses are the norm for women, while men strut their stuff in suits or jackets and ties. On three- to six-night cruises, Divina hosts one formal night. For sailings of seven to 10 nights, passengers have two formal nights, three for sailings of 11 to 14 nights and four on sailings of 15 nights or longer.

Not permitted: At night, jeans, T-shirts, shorts and bare feet are prohibited in main public areas, including the main dining room, but are not enforced in the theater or disco (except bare feet, which are always prohibited anywhere other than at the pool).

Find an MSC Divina Cruise from £164

Where does MSC Divina sail from?

Where does MSC Divina sail to?

How much does it cost to go on MSC Divina?

Cruises on MSC Divina start from £164 per person.

Is MSC Divina a good ship to cruise on?

From the start MSC buffered us from the harsh realities of the outside world and encouraged us to stay informed but to relax and let them handle everything, and that they did!... Read More
Keithlampkin

(After this review MSC should make me a spokesperson) We have dropped the other cruiselines and gone with MSC..this was our 6th MSC cruise..but lets talk this latest cruise.... Read More
cruiselogic

A Rough Start, But MSC Came Through. Ocean Cay Is Great!

We used that future cruise credit to book this 3-night cruise on MSC Divina that allowed us to visit MSC Ocean Cay.... Read More
jstackhouse

MSC- Was good but service and excursions sub par

After some research we chose the Divina mainly do the the itinerary. It was a 12 day cruise with stops in Jamaica, Aruba, Columbia, Panama, Mexico and their own island.... Read More
The Cruising Couple